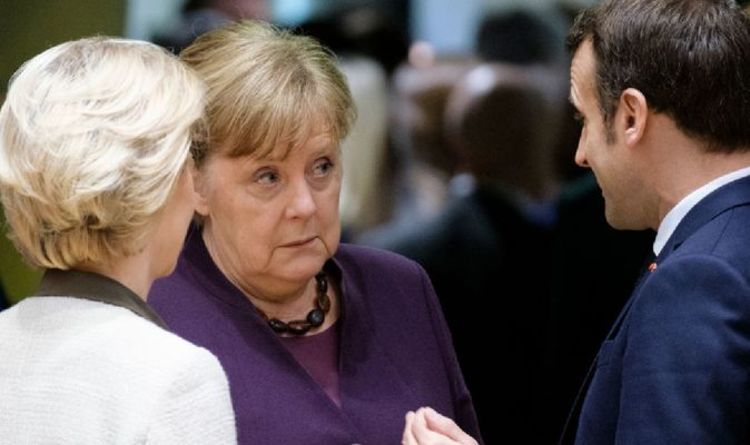 Anice Lajnef is the Minister of Finance at ‘Le Gouv’ and has worked many years as a trader in derivatives for major banks such as Société Générale and Barclays. ‘Le Gouv’ is the political project which emerged from the Yellow Vests movement in France and is the brainchild of one the group’s leading organisers, Fabrice Grimal. One of the main purposes of ‘Le Gouv’ is to generate new ideas on how to change the political and economic status quo in France, as well as to eventually stand candidates in Presidential elections.

Mr Lajnef told Express.co.uk a country could not have true sovereignty if it did not possess its own currency.

He explained: “I think if you want to have your sovereignty then for sure you have to have your own money – because the money is what makes the social link between people.

“Why should I share the same money with somebody who is in Estonia or Lithuania or whatever?

‘Le Gouv’s’ finance minister said that being signed up to the Euro denied national governments an essential tool to help them stimulate their economies – the ability to devalue their currencies.

He also claimed that the European Central Bank (ECB) primarily worked to protect the interests of the German economy to the detriment of everyone else.

“What is sure is like if for the moment the ECB physically, geographically is in Frankfurt, but also in the mindset the ECB is German, not European,” he said.

“So everything is done for the German economy and instead of being able – Italy, Spain or France – to play on his currency and to weaken it if we need – we can’t.”

Mr Lajnef accused the European Union of facilitating fiscal dumping by failing to impose a uniform taxation system across the bloc, thereby allowing some countries to gain an unfair competitive advantage.

“You have some arbitrage that are done within the EU – we share the same money but in reality we don’t have first the same rates and we don’t have the same taxation,” he explained.

“So the market, the multinational, big companies they arbitrate between the countries and then you have fiscal dumping.

“You have Ireland that goes with lower tax rates, you have the Netherlands, you have Luxembourg – so in fact the wolves are with us – these three countries are doing fiscal dumping and in the end who is losing money is France, Italy, Spain and the UK when they were in the EU.”

He added: “Either the EU has to accept that we share the same taxation and we cannot have dumping, by doing same rules or whatever, or we have to get out.”

According to data provided by taxfoundation.org, corporate tax rates in France in 2020 were 32.02 percent, while in Ireland they were just 12.5 percent.

In June, G7 leaders signed up to an agreement that commits them to introducing a global corporation tax of at least 15 percent, in an attempt to create a more equitable playing field.

However, the Yellow Vests want to tax multinationals the equivalent of the share of sales that they do within France.

“So we don’t have this arbitrage with Ireland – because we cannot trust even the countries that are within the European zone, which is Ireland, Luxembourg, Netherlands – you have now even Portugal and Malta in the game.”