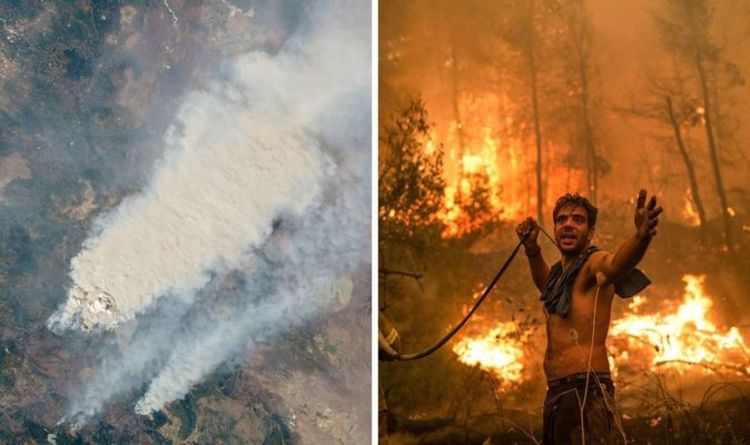 Devastating wildfires are taking place across the world right now, as soaring temperatures and dry conditions continue in the wake of the ongoing climate crisis. Southern Europe has been particularly badly affected, with fires raging in Greece, Italy, and Turkey over recent weeks. Elsewhere, the USA and Russia are experiencing some of the most disastrous fires in recent years, with thousands of acres burning and hundreds forced to flee their homes.

Harrowing footage of evacuees being transported by boat as the fires engulfed the shore has emerged this week from the island of Evia, Greece.

The fire began on August 3 after the worst heatwave in decades, where temperatures reached 45C, and has now cut across the island, burning out of control for five days.

British firefighters have been deployed to the island, where at least 20 people have been hospitalised due to injuries.

California is battling the largest single wildfire in the state’s history, as the Dixie Fire continues to rage, destroying entire towns in the process.

The fire currently covers 700 square miles in central California, with only 21 percent of the fire contained.

People have lost their lives, although a death toll has not yet been released, and a number of people remain missing.

Siberia currently has more than 150 active forest fires, threatening dozen of villages across the vast region.

In northeastern Siberia, 93 active forest fires burned across 2.8 million acres of Sakha-Yakutia, officials have said, making it the worst affected region of Russia.

Russia has recorded high temperatures as a result of climate change in recent years.