Wildfires in West could be exacerbated by ‘fire clouds,’ dry lightning 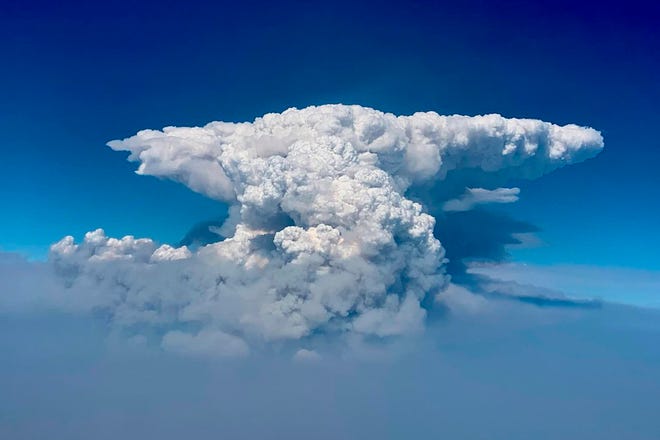 Powerful storms forecast for parts of the drought-stricken West this week could actually do more harm than good as “fire clouds” and dry lightning sweep across a region already dotted with wildfires fueled by parched vegetation, heat and winds.

The storms brought flash flooding to Phoenix and other areas of the Southwest, but less rain is forecast farther north.

More than 80 current wildfires were burning through 1,157,976 acres in 13 states, battled by almost 20,000 firefighters. Generally unstable weather conditions could add to the misery in coming days, the National Interagency Fire Center warned.

In North-Central California, the Dixie Fire had burned through 30 square miles and was threatening more than 800 homes and other structures. The remoteness of the fire, along with the steep terrain, was adding to issues faced by hundreds of firefighters at the scene.

The fire’s edge is just a few miles from the town of Paradise, which burned almost completely to the ground in a wildfire three years ago, killing 85 people. But the fire was moving away from the town, and no evacuations or evacuation warnings had been issued Monday morning.

Pacific Gas & Electric said Sunday that its equipment may have been involved in the start of the Dixie Fire.

The utility said in a filing Sunday that a repair man responding to a circuit outage on July 13 spotted blown fuses in a conductor atop a pole, a tree leaning into the conductor and fire at the base of the tree.

PG&E equipment has repeatedly been linked to major wildfires, including the 2018 fire that ravaged Paradise.

Large “pyrocumulus clouds” formed over the Dixie Fire, producing a massive smoke column that further increased fire activity, CalFire said in an its latest incident report. Pyrocumulus clouds – fire clouds – look like giant, dirty-colored thunderheads that sit atop a massive column of smoke coming up from a wildfire. Often the top of the smoke column flattens out to take the shape of an anvil.

In Oregon, the Bootleg Fire has also produced pyrocumulus clouds. That fire has already burned almost 500 square miles, among the largest blazes in Oregon history. Fire authorities say pyrocumulus clouds are forming from 3 p.m. to 5 p.m. each day as the sun penetrates the smoke layer and heats the ground below, creating an updraft of hot air.

The fire, which ignited two weeks ago, remains “very active” and growing because of hot, dry, and breezy conditions, fire officials said in a bleak update late Saturday night.

Along the California-Nevada border, the Tamarack Fire had also burned about 30 square miles. The blaze had destroyed a couple of structures and was threatening the tiny California hamlet of Markleeville, population less than 150.

Dena Brown posted on Twitter that her father had been evacuated.

“We just had a 6.0 earthquake recently now this. #prayerrequest #TamarackFire,” she wrote.