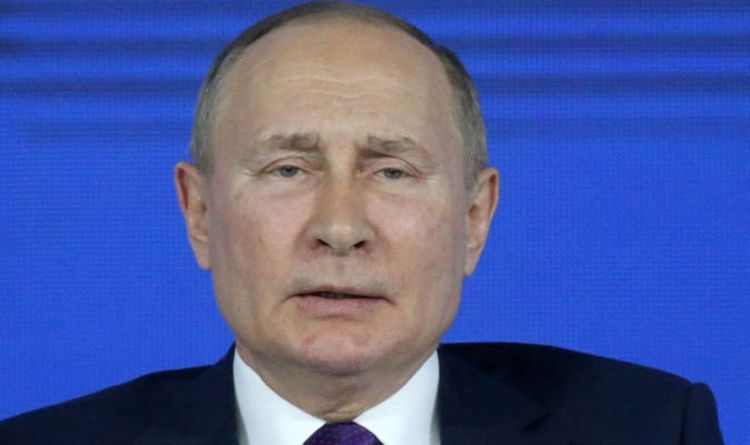 With fears of an attack from the Kremlin on Kiev still on the rise, the office of Ukrainian President Volodymyr Zelensky has claimed the country’s Donbass region, located in the east on the border with Russia, could play a key role in Vladimir Putin‘s argument for further escalation.

Ukrainian government officials said in a statement Moscow might claim it is “protecting Russian citizens” in war-torn Donbass.

As of April last year, 538,000 citizens with Russian citizenship lived in the region, and the figure is thought to have risen considerably since then.

Because of where it is located, the area is vulnerable to an annexation like Crimea’s in 2014, and Russia’s issuance of its passports to residents there has been described as “the first step” of a potential seizure.

READ MORE: Russia threatened with war as US declares Ukraine could be invaded at ‘any point’

Mr Zelenskiy said last May: “This is definitely the first step.

“The same thing happened once in Crimea, Crimea residents were given Russian passports.

“This is a big problem.”

In December, Kiev warned it would refuse to recognise Russian passports granted to people living in Donbass.

It claimed the same would go for those in Crimea, which has been the subject of the tense ties between the two countries, once the two biggest republics of the Soviet Union, for nearly two decades.

In the week of Kiev’s statement, Britain supplied Ukraine with short-range anti-tank missiles for self-defence and confirmed a small team of British troops would also be sent over to provide training.

In light of the 100,000 Russian troops amassed at the Ukrainian border and the little to no advances in security talks with the US, UK Defence Secretary Ben Wallace spoke of “legitimate and real cause for concern”, saying there could be “loss of life on all sides”.

However, while the West worries about what the Kremlin’s next move could be, Moscow continues to deny any plans of aggression.

The crisis, Mr Putin’s team insists, is mainly attributable to the threat posed by the tightening of relations between NATO and Ukraine.

Russian Deputy Foreign Minister Sergei Ryabkov said: “For us, it’s absolutely mandatory to make sure that Ukraine never, never, ever becomes a member of NATO.”

Negotiating sessions in Geneva, Vienna and Brussels last week deadlocked over such demands.

In yet another effort to avoid further conflict, US secretary of state Antony Blinken will meet Sergey Lavrov, Russia’s foreign minister, in Geneva on Friday.

The US, the EU and the Group of Seven, which includes the UK, have all made clear “massive consequences” would follow in the case of a Russian attack.