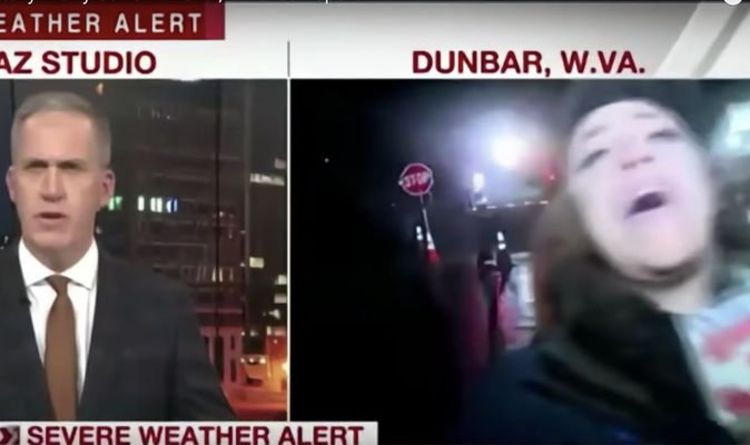 Viewers watching local TV in West Virginia on Wednesday were stunned when a car crashed into a news reporter live on-air during a broadcast. Tori Yorgey, 25, was reporting on a water main break when a vehicle could be seen driving towards her from behind before striking the reporter down. In a dramatic few seconds, Ms Yorgey lurched forward and the camera plunged to the ground – all of which continued to be broadcast live.

However, Ms Yorgey quickly bounced to her feet, downplayed the incident and continued on with the news report.

The reporter for NBC affiliate WSAZ in West Virginia told viewers: “Oh my God. I just got hit by a car, but I’m okay.

“You know that’s live TV for ya!

JUST IN: SAS ‘on standby’ to pull rug from under Putin

In the background, the driver who hit her is heard apologising, to which Ms Yorgey replies: “Ma’am, you’re so sweet, and you are OK.”

The reporter then told her alarmed studio anchor Tim Irr: “That woman was so nice, though. She didn’t mean to. It was an accident, and I know it was.”

A largely speechless Mr Irr responded: “Wow, that’s a first for you on TV, Tori.”

She then moved back onto the water main break story, telling viewers: “We’ll get back to the report. We’re on Roxalana Hills Drive in Dunbar. This is where that water break is.”

The 25-year-old added: “I was standing there looking at the camera and as I’m literally about to speak, I just feel, like, a big old hit in my back, and I just saw the car.

“Accidents happen all the time. I felt really compelled to let her know I am good.

“I felt safe, and that’s why I didn’t leave and I kept doing the live shot”