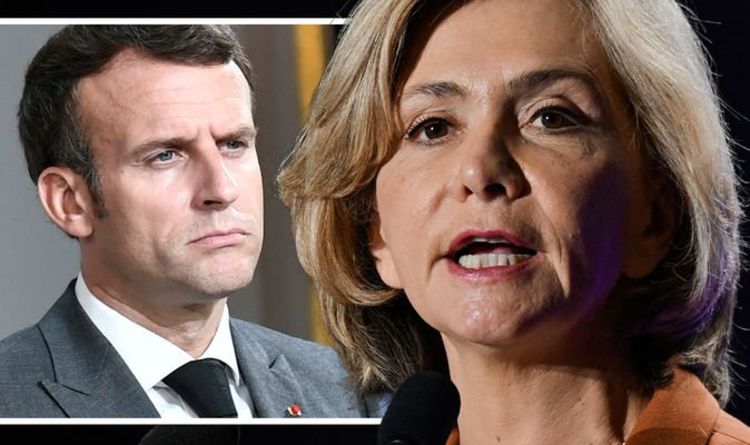 Speaking exclusively to express.co.uk, several leading academics have discussed the possibilities of an upset in the elections, which could see Mr Macron become a one-term president. James Shields, a Professor of French Studies from the University of Warwick argues that the main challenge comes from the centre of the political spectrum.

He added: No threat to his re-election will come from the hopelessly divided left; nor will it come from the far right, since neither Le Pen nor Zemmour has the capacity to muster enough moderate voters for a winning majority in the run-off.”

Yet, for Mr Macron, the clash of interests between Marine le Pen and Eric Zemmour, who have split the far-right, could be seen as a thorn in the side for the incumbent president.

Professor Shields says: “Both of these are Macron’s dream opponents; but a run-off against Pécresse would prove a different proposition, with her potential to build a much wider coalition beyond her centre-right base and to exert an “anyone but Macron” appeal in a way Le Pen and Zemmour could not.”

Pecresse is a ‘wake up call’ for President Macron (Image: Getty)

Warning of the real threat of an upset, Professor Shields ended: “Here lies the danger for Macron, with polls now suggesting that Pécresse could run him close or even beat him, this comes as a harsh wake-up call to a president who has long rested on the complacent assumption that he would again meet and beat, Le Pen in the run-off.”

Adding to the argument, Helen Drake, a Professor of French and European Studies, and Director of the Institute for Diplomacy and International Governance from the University of Loughborough said: “If Macron makes it through to the second round of the presidential election then Pécresse, if she made it, would be a bigger challenge than Le Pen or Zemmour, but he is unlikely to make it to the second round.”

Eric Zemmour is unlikely to make it to the second round, but remains a popular Google search subject (Image: Getty)

Professor Drake added that the first round of the elections may bring their own surprises.

She said: “But before the second round comes the first round where Macron – assuming he stands – will be challenged by both Pécresse and Le Pen.

“In the previous presidential elections in 2017, four candidates, including Macron, scored very closely to each other (Macron on 24% and three others on around 20%). So Macron’s first challenge will be the first round.”

Professor Paul Smith from the University of Nottingham said: “Pécresse is his biggest threat only if she gets through to the second round. And that’s a big if.”

He argued: “The poll published by BFM/Elabe/SFR/L’Express the other day saw Macron dropping 3 points to 23, and Pécresse and Le Pen at 17.

He ended by giving some hope to the National Rally Candidate Marine Le Pen, “So the latter [Le Pen] is slowly regaining to ground she lost in December when Pécresse won the right-wing primary and Zemmour formally announced he is standing.”

Yet for Emmanuel Macron, he also faces the challenge of the electorate, as well as the other candidates.

A series of events has left the reputation of the President tarnished.

The yellow-vest movement, the so-called “fishing wars” with Britain, and the handling of the COVID-19 situation are all problems that the people of France want answers for.

Professor Smith states: “Macron’s promise to get on the case on the unvaccinated and government policy regarding schools have seen him lose ground mostly among voters under 35, especially since it’s their children and their lives being disrupted.”

Suggesting Mr Macron legacy lies mainly in his handling of the COVID-19 crisis, Professor Shield’s added: “It is his management of the COVID pandemic that is most in the spotlight.

“Here Macron is generally seen to have handled the crisis well after a shaky start; at around 40 percent, his approval ratings remain high compared with his immediate predecessors, Hollande and Sarkozy.”

The left is in disarray, but has Jean-Luc Melenchon as its main candidate (Image: Getty)

But Professor Drake claims his legacy is fairly intact nonetheless, saying: “His legacy won’t have been an outright disaster.

“More threatening to his chances are underlying trends of mistrust in politics and disillusion with presidents: the two presidents before macron (Sarkozy and Hollande) only managed one term.

“And of course, macron has to actually stand as a candidate in order to stand a chance of winning.”

The latest polls, published by Politico currently have Mr Macron in the lead with 25 points, Ms Le Pen in second with 17 points, Ms Pecresse third with 16 points, and Mr Zemmour with 13.

The nearest challenge from the left comes in the form of Jean-Luc Melenchon on 10 points.