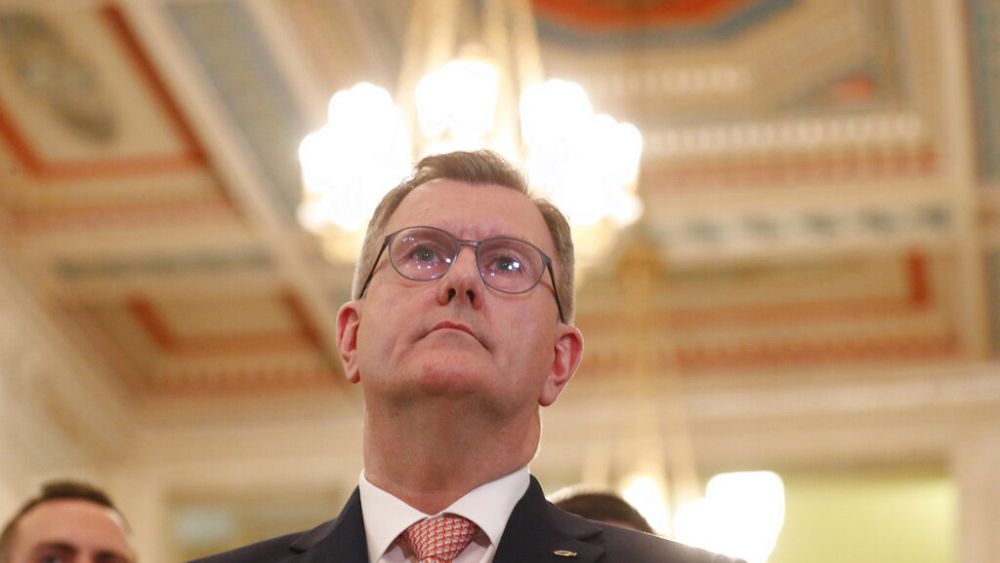 Northern Ireland’s second-biggest political party on Friday blocked the formation of a working legislature in Belfast, and said it would keep up the boycott until the UK government tears up post-Brexit trade rules it accuses of destabilizing the region.

The Democratic Unionist Party’s move deepens Northern Ireland’s political deadlock, which is fueling a UK-EU feud that could balloon into a trade war between Britain and the 27-nation European Union.

The DUP came second in a Northern Ireland Assembly election last week that saw Irish nationalist party Sinn Fein win the most seats — the first time a party that seeks union with the Republic of Ireland has won an election in the bastion of Protestant power.

Under Northern Ireland’s mandatory power-sharing rules, that gives Sinn Fein the post of first minister, with the DUP taking the deputy first minister job. A government can’t be formed unless both roles are filled, and the DUP says it won’t take part unless border checks on goods moving to Northern Ireland from the rest of the UK are scrapped.

It stymied attempts to elect a speaker for the assembly when they met for the first time on Friday, leaving the assembly unable to function.

“The DUP received a mandate to remove the Irish Sea border and our mandate will be given respect,” assembly member Paul Givan told legislators. “Our message is now clear: It is time for action, words will no longer suffice.”

DUP leader Jeffrey Donaldson said the party’s concerns over the new trade rules, known as the Northern Ireland Protocol, “are not merely some political squabble.”

“The protocol is a direct challenge to the principles that have underpinned every agreement reached in Northern Ireland over the last 25 years” of Northern Ireland’s peace process, he said. “It erodes the very foundations that devolution has been built upon.”

Sinn Fein leader Michelle O’Neill accused the DUP of “disgracefully holding the public to ransom for their Brexit mess.”

Naomi Long, leader of the centrist Alliance Party, the third largest in the assembly, said it was “a shameful day for the DUP.”

“We want to serve the public but are prevented from doing so,” she said.

Arrangements for Northern Ireland — the only part of the UK that shares a land border with an EU nation — have been the thorniest subject of contention in the U.K.’s divorce from the bloc, which became final at the end of 2020.

A deal was agreed to keep the Irish border free of customs posts and other checks, because an open border is a key pillar of the peace process that ended decades of violence in Northern Ireland. Instead, there are checks on some goods, such as meat and eggs, entering Northern Ireland from the rest of the UK.

The arrangement is opposed by the DUP and other unionists in Northern Ireland, who say the new checks have created a barrier with the rest of the UK that is hurting businesses and undermines unionists’ British identity.

Sinn Fein and the other nationalist and nonaligned parties, which collectively got a majority of votes in the election, want to keep the Protocol.

Many people and businesses in Northern Ireland just want a functioning government.

“The uncomfortable truth is, while this continues, the reputational damage to Northern Ireland as a place to invest and work grows daily,” said Paul Murnaghan, president of the Northern Ireland Chamber of Commerce and Industry.

Prime Minister Boris Johnson’s government says the political deadlock in Belfast is proof the regulations — which it agreed to — are destabilizing Northern Ireland’s peace agreement, which relies on support from both Protestant unionist and Catholic nationalist communities. The UK says it will act unilaterally to suspend some of the rules if the EU won’t agree to major changes.

Foreign Secretary Liz Truss said the UK will have “no choice but to act” if the EU does not show enough “flexibility.” The UK could introduce legislation giving it the power to override the treaty as soon as next week.

The EU accuses Johnson’s government of threatening to break international law by breaching a binding treaty.

“Don’t forget this treaty was designed and ratified and agreed by the British government under this prime minister,” Irish Foreign Minister Simon Coveney told the BBC. “He stood for election and got a huge mandate from the British people on the back of that deal and now is blaming the deal for the problems in Northern Ireland.”

Amid growing signs the UK is planning to scrap at least part of its Brexit divorce deal, Johnson week sent a government minister, Conor Burns, to Washington to try to allay fears among US officials about potential risks to Northern Ireland peace. President Joe Biden has warned that no side should do anything to undermine the Good Friday Accord, the 1998 deal that laid the foundations of peace.