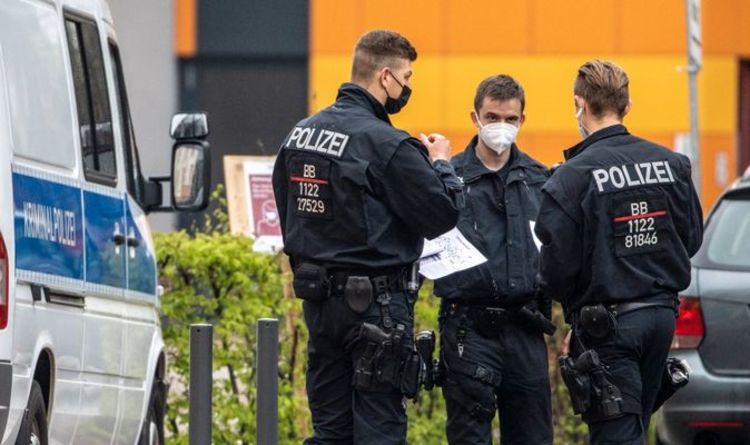 It followed a joint investigation by German and UK authorities.

The suspect, aged 57 according to a Metropolitan Police statement, had his home and workplace searched by police.

He is accused of having worked for the Russian secret service since at least November 2020.

During this time the suspect allegedly handed over secret material, which he came across via his work, at least once.

In return he “received cash in an as yet unknown amount”.

In a statement German police said: “David S. was employed as a local staff member at the British Embassy in Berlin until his arrest.

“On at least one occasion, he transmitted documents he had obtained in the course of his professional duties to a representative of a Russian intelligence service.

“The defendant received cash in an as yet unknown amount in return for his information transfer.

“The arrest is the result of joint investigations by German and British authorities.

“The suspect will be brough before the investigating judge of the Federal Supreme Court later today (August 11, 2021), who will open the arrest warrant for him and decide on the execution of pre-trial detention.”

There had been an arrest warrant for David S. since August 4th.

Russia has been accused of mounting a sophisticated espionage operation against western powers.

The Metropolitan Police said a 57-year-old man had been arrested on suspicion of committing crimes relating to ‘Intelligence Agent activity’, under German law.

A spokesperson for the UK Home Office said: “An individual who was contracted to work for the government was arrested yesterday by the German authorities.

“It would not be appropriate to comment further as there is an ongoing police investigation.”

He said: “Some hostile actors are prepared to come to the UK to kill.”

In 2018 Sergei Skripal, a Russian intelligence officer turned British double agent, and his daughter were poisoned with Novichok in Salisbury.

However Dawn Sturgess, a British women who came into contact with the poison, later died.

She had come across the poison in a fake perfume bottle, along with her partner Charlie Rowley.

The British Government said the Russian state was responsible for the attack, which Moscow has denied.