Sen. Durbin: It Was Very Real And Very Specific

Video of Sen. Durbin on CNN’s State Of The Union:

Senate Judiciary Committee member Sen. Dick Durbin describes Jeffrey Rosen as testifying that Trump was directly involved in pressuring the DOJ to overturn the election, “It was real. Very real. And it was very specific.” https://t.co/IfAUTQD4Iq 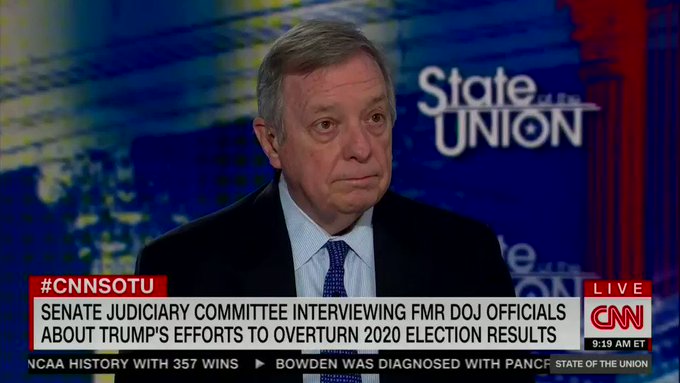 When Trump Failed To Get The DOJ To Overturn The Election, He Moved Toward The 1/6 Plot.

Everything that happened between Election Day and 1/6 is related. If Trump’s pressure campaign on the DOJ had worked, the 1/6 attack would not have happened.

It is because Trump could not successfully abuse his presidential power to overturn the election that he turned his attention toward plotting the attack on the Capitol.

Trump had spent decades not getting directly involved in various potentially criminal enterprises and schemes. He always left himself room for deniability but losing the election heightened his desperation.

Trump slipped up, and this time witnesses are coming forward to lay the plot to overturn the election at his feet.