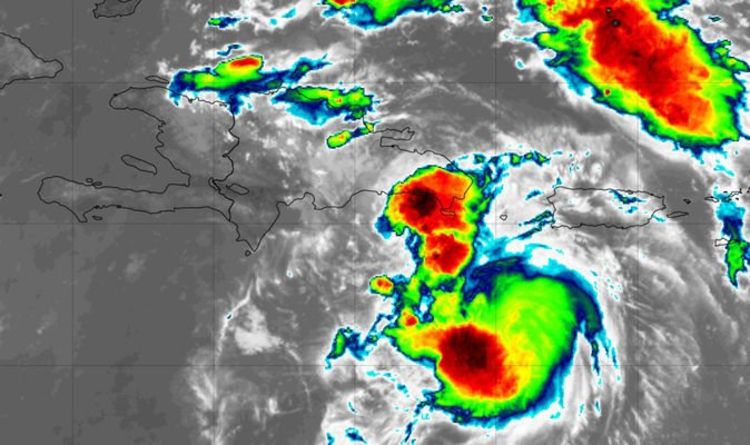 The system is expected to bring heavy rain, strong winds and high seas to several areas over the coming days.

In light of the tropical storm, the NHC has issued several warnings and watches.

Tropical Storm Watches have also been issued for other areas including Haiti from the northern border with the Dominican Republic to Gonaives, the Turks and Caicos Islands and the southeastern Bahamas.

The NHC added in its latest update: “Interests elsewhere in Haiti and the Bahamas, as well as in eastern and central Cuba, should monitor the progress of this system.”

Tropical-storm-force winds extend outward up to 45 miles from the system centre as of the last update.

WXCHARTS tweeted: “After a quiet few weeks, Tropical Storm #Fred has formed in the Caribbean, possibly affecting Florida by the end of the week.”

Forecasters have urged residents in Florida to prepare for a potential Category 1 hurricane by the time Fred hits the US.

AccuWeather said in its report for Tropical Storm Fred: “Some time during Friday or Friday night, the system is forecast to emerge from the northern coast of Cuba and begin the northward turn.

“How quickly this turn occurs will determine if the tropical system takes a path over the Florida Peninsula, over the Florida Keys and into the eastern Gulf of Mexico or perhaps farther west over the Gulf during this weekend.

“Even though the projected path and strength of Tropical Storm Fred are subject to change this far out, people in the Keys and along the west coast of the Florida Peninsula should prepare for the impacts of a strong tropical storm or perhaps a Category 1 hurricane to approach this weekend.”