TRENDING NOW
Decades-old cold case of missing Tennessee teens reopened after diver finds car underwater | France and Italy handed rare victory over EU – bloc backs down on hated rules | World | News | Amazon’s AWS outage could have been much worse | Stitch Fix, Roku, Norwegian Cruise Line and more | More young children are killing themselves: The COVID-19 pandemic is making the problem worse | Scarborough Notes that Meadows Accidentally Gave Away the Trump Administration’s Biggest Fear | WHO ‘confident’ current COVID-19 vaccines will work against Omicron | There are more private equity exits than there have been in 2 decades. How long will it last? | The Hosts of “Fox and Friends” Mourn an “American Icon” After Someone Burns Down Fox’s Christmas Tree | Man arrested for allegedly setting Christmas tree on fire outside Fox News in NYC | 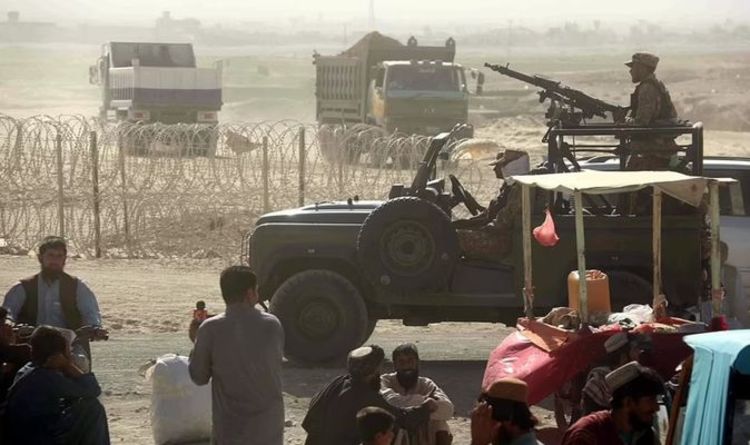 The Taliban has made rapid territorial gains across the country in the past few days.

Zaranj was the first city to be seized on Friday, and since then the cities of Kunduz, Aibak, Sar-e-Pul, Taloqan, and Shebergha have also fallen into the hands of the jihadists over the weekend.

Local officials said that Farah, located close to the border with Iran, was captured following a “brief” fight with security forces according to Shahla Abubar, a member of Farah’s provincial council.

The capture means that extremists are now in control of the governor’s office and police headquarters in the city.

And it proves significant as it provides the militants with another border crossing into Iran.

Captures have been relentless during the Taliban offensive while American and NATO forces are currently finalising their withdrawal from the country.

At present, the Taliban have captured seven out of the 34 provincial capitals in the country in less than a week. As a result, a senior EU official told Reuters news agency that Taliban forces now control 65 percent of Afghan territory.

The Pentagon today says there is “not much” it can do to help government forces – with a spokesman saying bluntly: “It’s their country to defend now”.

John Kirby, as Press Secretary for the United States Department of Defense and Assistant to the Secretary of Defense for Public Affairs, said he was “deeply concerned” that the battle for control of the country appears to be shifting in favour of the Taliban.

He was quick to reiterate that US President Joe Biden remains committed to ending America’s presence there at the end of the month.

However, when asked whether the US will be stepping up airstrikes to help government forces drive back Islamist fighters and help defend against the widespread conflict, Mr Kirby told reporters “it’s their struggle”.

As Jihadist fighters continue to push back government forces, local residents are evacuating the cities over fears for their safety.

Up to 15 flights are leaving the city for Kabul each day, according to Saad Mohseni, chairman of the MOBY Group which owns radio stations in Afghanistan.

As the group seize control of cities across the country, many residents either subject themselves to self-inflicted house arrest or find means of fleeing for safety.

Sher Mohamed Abbas, a provincial tax official confirmed these are the tactics used in the area, but as a resident of Kabul he described it as “not a safe option anymore”.

The terror group is centralising their power in cities including the Afghan capital Kabul, with residents in Aibak reporting that Taliban fighters are moving into government buildings.

With these rapid gains, the Taliban intends to defeat the US-backed government and reimpose strict Islamic law across Afghanistan.

The city of Mazar-i-Sharif, the largest in the north of the country, came under attack from the Taliban, despite government forces saying they had repelled an initial assault.

With little in means of bolstering the attacks due to lack of support from the Pentagon, areas in the north, west and south of the country have been captured as foreign forces withdraw.

Less than 12 strikes were carried out by the US over the course of the weekend as the Taliban overran the provincial capitals. Pentagon officials said no order had been received to increase the frequency of those strikes in order to aid the situation.

Despite the lack of airstrikes, Mr Kirby said that America will strengthen its efforts to resolve the fighting through diplomatic channels. He said that a representative Zalmay Khalilzad has been sent to Qatar to “negotiate a political settlement” with the Taliban.