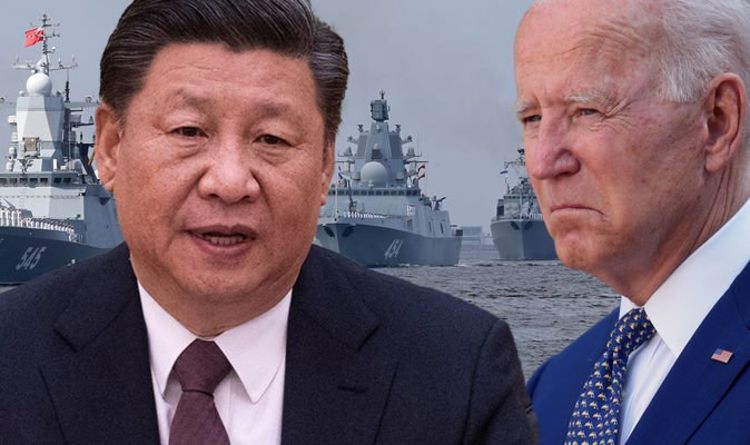 Taiwan sits to the north of the disputed resource-rich ocean and is viewed by Beijing as a breakaway province that will one day be reunited with the Chinese mainland. Beijing also claims sovereignty over the entire South China Sea, although Taiwan and neighbouring countries have counterclaims. In recent months the self-governing island nation, which has its own democratically-elected government, said record numbers of Chinese military aircraft had flown into its air defence identification zone.

Taiwan’s own military was recently boosted after US President Joe Biden approved a $750million (£541million) arms deal for the country – his administration’s first backing for a weapons deal for Taipei since he took office.

The US move angered Beijing, with the Chinese Embassy saying it “undermines China’s sovereignty and security interests by selling arms to the Taiwan region”.

According to Dr Jonathan Sullivan, a China specialist and political scientist at the University of Nottingham, any Chinese-US conflict over Taiwan, would “result in significant and long-lasting disruption on a global scale”.

He told Express.co.uk: “It would reconfigure international relations, lead to an ugly occupation of Taiwan and make China a pariah state.

JUST IN: South China Sea warning as US policy ‘under attack’ amid Joe Biden’s arms sale to Taiwan

“Depending on the circumstances that led to a hypothetical invasion, it would probably lead to militarised conflict involving the world’s two superpowers.

“The underlying danger that a clash over Taiwan could precipitate open warfare between the US and China is always there, and so this question always provokes interest.”

The recent US arms deal to Taiwan is to include 40 self-propelled howitzer units, as well as 1,700 kits to develop GPS-enabled missiles.

By approving the sale, Mr Biden continued decades of US military and political support for Taiwan.

Biden: Has continued US backing of Taiwan (Image: GETTY)

The US has also followed up its military assistance with a war of words, claiming “maritime rules and principles [are] under threat” in the South China Sea.

On Monday US Secretary of State Antony Blinken issued the indirect warning to China during the ‘Enhancing Maritime Security: A Case for International Cooperation’ debate chaired by Indian Prime Minister Narendra Modi.

He said: “In the South China Sea, we have seen dangerous encounters between vessels at sea and provocative actions to advance unlawful maritime claims.

“The United States has made clear its concerns regarding actions that intimidate and bully other states from lawfully accessing their maritime resources.”

Dr Sullivan explained that Beijing’s goal is to re-unify Taiwan with the rest of China and it has been using a military show of strength to demonstrate it is capable of taking the island nation.

However, he stressed that despite the war of words between Washington and Beijing, an actual conflict is not imminent.

He said: “The Communist regime is obviously heavily invested in ‘recovering’ Taiwan, but it also acknowledges the above risks and so is unlikely to invade unless it feels there is no other option to prevent ‘Taiwan independence’.

“In recent years it has ratcheted up the pressure on Taiwan and bellicose rhetoric, and is busily readying itself through military modernisation to be in a position to credibly take Taiwan.

“The military balance has shifted, but it is still not yet a slam dunk, and thus we are not yet at a point where an invasion is remotely likely.

“China has many other levers it can use to increase Taiwan’s discomfort that fall short of invasion. Neither is it on the cards that Taiwan will declare independence.”