The Senate will take a final vote on the $1.2 trillion bipartisan infrastructure package tomorrow after clearing the final procedural hurdle.

“The two track process is moving along,” Majority Leader Chuck Schumer said. “It’s taken a while, but it’s gonna be worth it, as, hopefully, we pass both bills very, very soon.”

The legislation, known as the Infrastructure Investment and Jobs Act, “invests $110 billion in funding toward roads, bridges and major projects, $66 billion in passenger and freight rail, $65 billion to rebuild the electric grid, $65 billion to expand broadband Internet access, and $39 billion to modernize and expand transit systems,” according to a CNN report, and even includes “$55 billion for water infrastructure, $15 billion of which will be directed toward replacing lead pipes.”

The Senate is expected to pass the bill.

As soon as that vote is complete, Schumer has indicated that Democrats will next work on the details of the $3.5 trillion reconciliation bill.

“The Budget Resolution provides a target date of September 15th to the committees to submit their reconciliation legislation. We will work towards this goal and meet, as a caucus, during the week of the 15th to review the bill,” Schumer said in a letter to fellow Democrats this morning, adding: “Please remember that the resolution only includes ‘top-line’ reconciliation instructions to the committees, and that every Senator will have opportunities to shape and influence the final reconciliation bill after adoption of the Budget Resolution.”

Schumer to Senate Democrats on $3.5T budget resolution: “The resolution only includes ‘top-line’ reconciliation instructions to the cmtes, and that every Senator will have opportunities to shape and influence the final reconciliation bill after adoption of the Budget Resolution.” https://t.co/XRZjFWOoFo 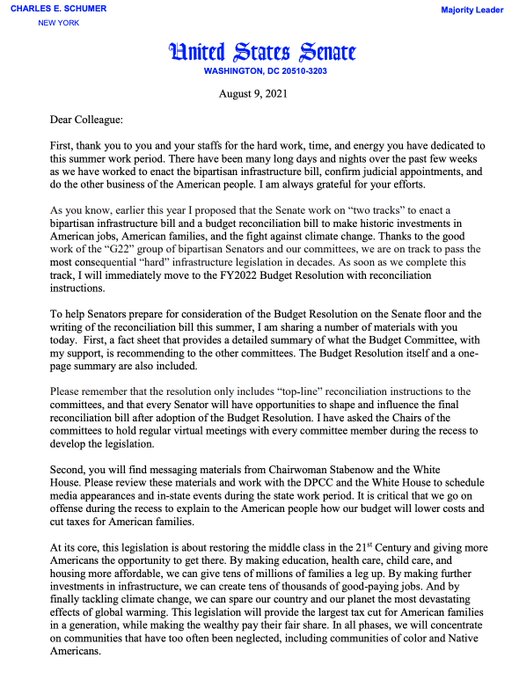