Quirinale treaty: Can a new French-Italian pact shift the balance of power in Europe? 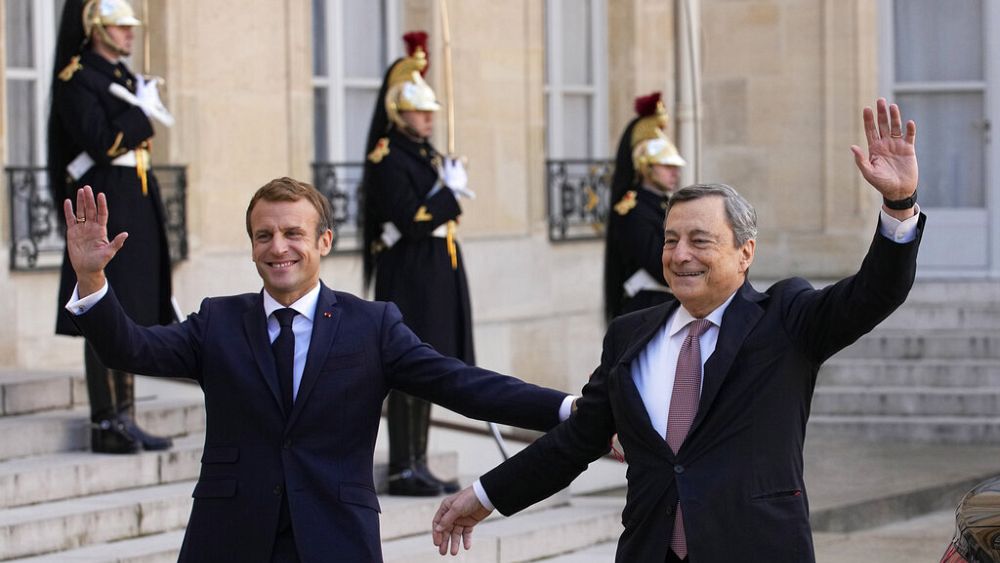 After years of diplomatic tensions, France and Italy are due to seal a landmark pact of friendship and cooperation on Thursday.

According to the Elysée, this treaty “will promote the convergence of French and Italian positions, as well as the coordination of the two countries in matters of European and foreign policy, security and defence, migration policy, economy, education, research, culture and cross-border cooperation.”

The move will have “an important symbolic value” in a European context marked by instability after Brexit and the political transition in Germany, an Italian government source said.

The pact will also aim to tilt the balance of power in Europe after the departure of German Chancellor Angela Merkel, an Italian government source told Reuters news agency.

It comes nearly 60 years after a French-German treaty signed by Konrad Adenauer and Charles de Gaulle gave new impetus to the process of European integration.

Can the new French-Italian pact reshape the European Union in the same way as its German-French ancestor?

Here is what we know so far about the accord and its possible fallout for Europe.

What’s the pact about?

Named after the palace of the Italian Presidency in Rome, the “Quirinale Treaty” was announced in 2017 to give “a more stable and ambitious framework” to French-Italian cooperation

Paris and Rome wanted to conclude it before the departure in January of Italian President Sergio Mattarella, who is at the end of his seven-year term, and ahead of the 2022 French presidential election.

While the details of the pact have not yet been disclosed, “what we know is that there are going to be 11 chapters covering a lot of different topics going from internal matters such as youth and research to European cohesion and foreign policy,” said Mathilde Ciulla, programme coordinator at the European Council on Foreign Relations in Paris.

“So basically, this is about institutionalising and structuring the partnership between France and Italy,” the expert told Euronews.

“Obviously, the two countries have been working together for quite a long time but the French-Italian relationship didn’t have what the German-French relationship had with the Elysée Treaty. So I think it’s it’s about structuring the relationship and trying to match this level of cooperation,” which is “long overdue,” she added.

From crisis to ‘honeymoon’?

The treaty will also help address recent tensions between Rome and Paris.

A range of disputes has strained the transalpine relations in recent years, especially after the formation in 2018 of a populist government led by the 5-star Movement and the far-right League party.

The crisis peaked in early 2019 when the Vice-President of the Italian Council, Luigi Di Maio, met in France with a leader of the “yellow vests” protest movement.

Shortly before, Interior Minister Matteo Salvini called for the resignation of the French president.

To protest, Paris temporarily recalled its ambassador to Italy in what became the most serious diplomatic crisis between the two neighbours since 1945.

Italy for its part says Paris has left it alone in handling flows of migrants disembarking on its shores.

Rome also criticised Paris for sheltering former members of the far-left “Red Brigades” who had taken refuge in France. But Macron put an end to the Mitterrand-era doctrine by ordering their arrest last April.

The two countries have fully restored their ties under Draghi, whose pro-European and centrist views are in tune with those of Macron.

From now on, “we are in full honeymoon between Paris and Rome,” said historian Marc Lazar, professor at Sciences Po.

“There are many points of convergence at a time when Germany is between two waters”, he told AFP.

But some in Italy remain wary of their European neighbour, which is sometimes perceived as a greedy business partner.

For some Italians, the French have an appetite for Italian companies but they sometimes have difficulty accepting reciprocity.

The treaty has therefore sparked criticism in Italy. Economist Carlo Pelanda, writing in Starmag magazine, called it “a self-annexation to France, on an industrial and strategic level.”

Ciulla told Euronews that neither Rome nor Paris were “naive,” with issues such as migration poised to remain sensitive topics.

But the treaty offers a “commitment to work together”, she added, ensuring that tensions will not escalate to the point of recalling ambassadors.

What does the pact mean for the rest of EU?

“On economic concerns, for example, or on migration, the French can help and bring that up to the frugal states” of northern Europe, the expert went on.

She insisted that the new alliance was not against Berlin.

The move could also “be seen positively in smaller states, showing that France is not all about just Germany, and that France acknowledges the importance and the opinion of other states,” she went on.

“But once again, it’s always about communication. You know, France has not always been very good at communicating its initiatives and explaining what is doing. So maybe this new treaty should also be accompanied by a large initiative of communication with other states, saying: ‘This is us reaching out, asking for collaboration and being open to coalition-building.'”

Ultimately, the fate and significance of the new treaty will largely depend on the outcomes of upcoming elections on both sides of the Alps, with the two countries due to hold presidential contests in the coming months.