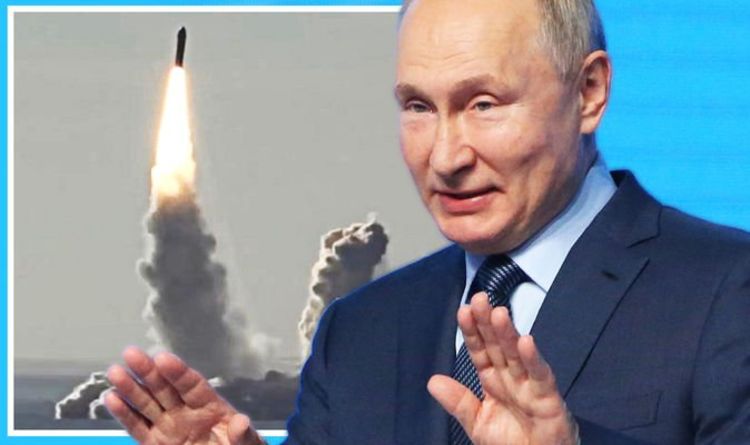 The Russian leader revealed his country has developed a weapon that flies more than five times faster than those being developed in the US. While addressing an energy forum, Mr Putin said nowhere is directly under threat.

He said: “This is not just a hypersonic, this is an intercontinental missile.

“This is a much more serious weapon than you just said.

“And they are already on alert in Russia.”

The Russian President continued: “There is nothing unusual here.

“The high-tech armies of the world will have such systems, they will, and in the near future.

“We do not abuse this, we do not threaten anyone.”

This came just days after Moscow revealed it had successfully test-fired its new Zircon hypersonic missile from a submarine for the first time.

Footage from the launch showed the 6,679mph rocket being fired from the submarine Severodvinsk before streaking into the sky.

In July this year, the Pentagon warned a nuclear war could happen as Russia and China armed themselves with terrifying nuclear weapons.

According to a report by the Pentagon, Russia and China are the most serious threat to the US because of the technology and weapons arsenal the countries already possess.

The Pentagon report said: “As a result, there is an increased potential for regional conflicts involving nuclear-armed adversaries in several parts of the world and the potential for adversary nuclear escalation in crisis or conflict.”

Despite naming North Korea and Iran as threats, the most serious concern for Washington is Russia and China.

This is due to the technology and weapons they already possess.

In 2019, Russia and the US withdrew from their 1987 treaty which required the US and Soviet Union to get rid of its nuclear and conventional ground-launched ballistic and cruise missiles with ranges of 500 to 5,500km.

The two counties extended the New Strategic Arms Treaty for five years in 2021.

This agreement enhances the US national security and puts verifiable limits on all Russian deployed intercontinental-range nuclear weapons.

China is also reported to have increased its number of nuclear weapons including its “most advanced” submarine-launched missiles.