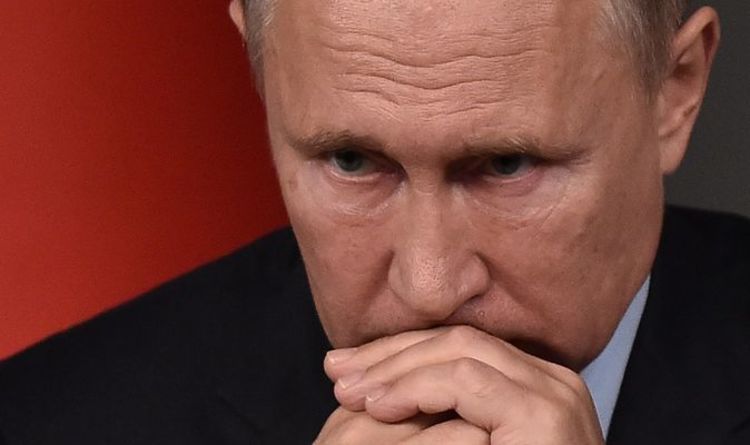 Russia unveiled the fifth model of the Sukhoi warplane on Tuesday after the launch video claimed it was developed “in record time”. The Kremlin’s state arms maker, Rostec, has said the fighter jet can fly twice as fast as the speed of sound and revealed it cost up to $30million.

The new plane, known as ‘Checkmate’, was designed in May to challenge the American F-35 fighter jet.

The 68-year-old said: “Russian aviation has great potential for development”.

And the General Director of the United Aircraft Corporation, Yury Slyusar, said the Russian President was “pleased” by what he saw.

The Kremlin suggested it is eyeing up selling the new fighter jets to India, Vietnam and several African countries.

Nearly 300 orders are expected to be made in the next fifteen years.

‘Checkmate’ is not scheduled to take to the skies until 2023 and the first batch will be produced in 2026.

One peculiar poster showed ‘Checkmate’ being wheeled across a runway covered in tarpaulin. Underneath the image, the advert read: “Wanna See Me Naked?”

The Sprut-SDM1 can travel at seven knots in water and up to 45mph on land. It is also said to be able to completely submerge in water and fire upon approach to the shore.

Throughout Putin’s tenure, Moscow has prioritised investment in defence and modernising the armed forces. Some analysts now argue the Russian military has not been better-equipped for conflict at any point since the 1990s.