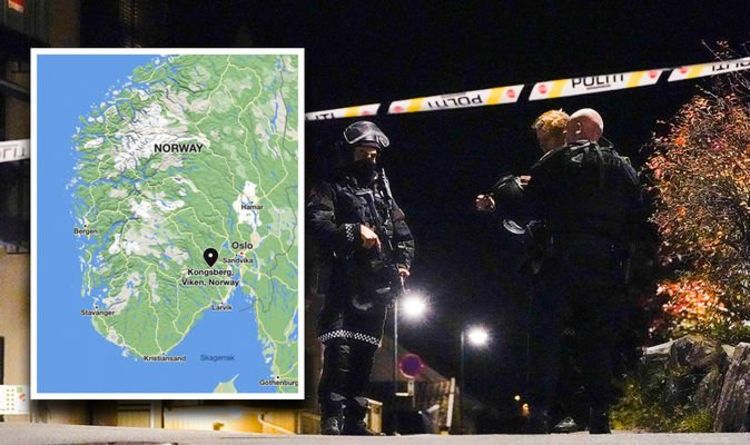 Several people have been killed after a man undertook a bow and arrow attack in Norway. Police announced the incident in the town of Kongsberg southwest of the capital Oslo at around 6.30pm local time (5.30pm BST). But were these crimes a result of a terrorist incident?

The deadly incidents took place in the town of Kongsberg, which is located 51 miles southwest of Oslo, on October 13.

A suspect has been apprehended by police – with authorities saying they believe he acted alone.

Police were called to the scene on Wednesday evening with additional resources dispatched from other areas to help.

Police chief Oyvind Aas said: “The man has been apprehended … from the information we now have, this person carried out these actions alone.

“Several people have been injured and several are dead.”

The attack began about 6.10 pm local time in Kongsberg, an hour outside of Oslo, and ended at least 30 minutes later.

Police believe the man acted alone with authorities now revealing at least four people have been killed, with more injured.

The man who committed the act has been arrested by police.

He has been taken to a police station in the town of Drammen, which is around 40 miles east of the attack, the police said.

Dozens of emergency vehicles are reportedly at the scene, including ambulances, police cars and helicopters.

Unni Grøndal, Oslo police spokesperson: “We are helping with national assistance resources such as police helicopters, bomb squads, and crews from the Emergency Response Troop.”

Was the attack terror-related?

When asked if the incident was being treated as terrorism earlier this evening, a press officer for Norwegian police said it was “not clear as of yet, it’s too early to tell.”

Mr Aas did not rule out this motivation either – adding “time will tell”.

Authorities are still looking into whether the bow and arrow attack was an act of terrorism after police apprehended the suspect in a “confrontation”, according to Norwegian Public Broadcasting.

Kongsberg is a town and municipality in Viken county in Norway.

The city is located on the river Numedalslågen at the entrance to the valley of Numedal.

There are an estimated 28,000 people living in the region according to recent population data.

The area is best known as the site of the Royal Norwegian Mint which mints Norwegian coins and produces circulating and collectors’ coins for other countries.