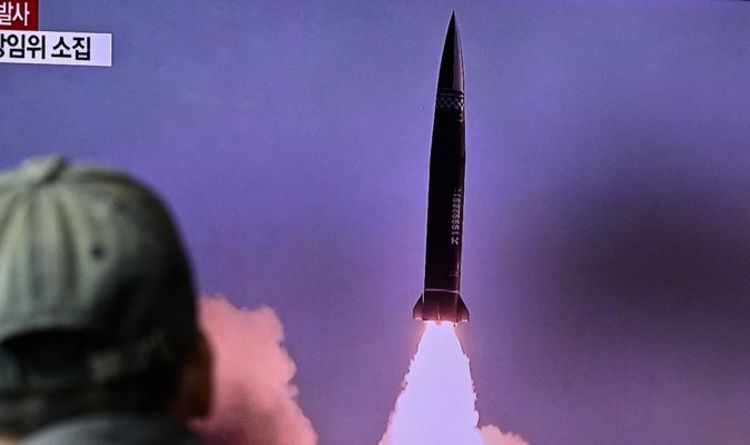 North Korea’s nuclear capabilities have been provided a boost as a result of the recent firing of a new submarine-launched ballistic missile, according to Andrew Salmon. The Northeast Asia expert has warned that the latest test demonstrated that Kim Jong Un‘s regime is close to developing important military technologies that would allow a North Korean sub to potentially mount a second strike undetected in the event of an all-out war on the peninsula.

Mr Salmon told France24:  “Let’s remember North Korea has essentially sacrificed that civilian economy on developing military technologies and the two key technologies, it’s been working on now for decades have been missiles and nuclear devices, and it’s very very good at those.

“We’re not so clear about how good it is at submarines, it’s got a very large submarine fleet but these are small, old fashioned subs so still not entirely clear to us if the SLBM, the submarine-launched ballistic missile, that was fired yesterday was actually fired from a submarine or from some kind of underwater test platform.

“That having been said, we do know that North Korea is spending a lot of money on these programmes, and if they don’t have this capability right now, they will have it in the near future, and it’s an important capability.

“Currently, all their ballistic missile systems are land-based some are on trains, most are on these huge TELs, transport erector launchers.

“A submarine, of course, is a mobile platform, an offshore platform, it can hide it can feasibly survive a first nuclear strike from an enemy state.

“So this when fully developed will be a significant addition to North Korea’s tactical and strategic portfolio of weapons.”

North Korea is believed to have launched the SLBM off its east coast, the latest in a string of North Korean missile tests.

Pyongyang has so far rejected calls for talks with Washington and Seoul, accusing the United States and South Korea of talking peace while carrying out their own military maneuvers.

South Korean Foreign Minister Chung Eui-yong on Wednesday called for Washington to ease sanctions if the North returns to talks.

“Action must be taken as soon as possible to stop North Korea from further developing nuclear and missile capability,” he told parliament. “I think considering relaxing sanctions can surely be an option.”

“(The SLBM) will greatly contribute to putting the defence technology of the country on a high level and to enhancing the underwater operational capability of our navy,” added KCNA.

“It’s an interesting development but with only one submarine in the water that can launch notionally one or two of these it doesn’t change much.”

“Though a smaller North Korea SLBM design could enable more missiles per boat, it could also enable smaller less challenging SSB designs, including easier integration/conversion on pre-existing submarines,” Joseph Dempsey, a defence researcher at the International Institute for Strategic Studies, said on Twitter.