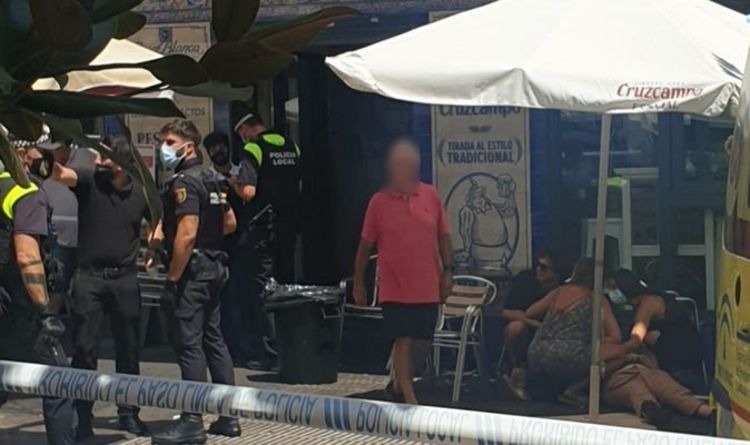 Shocking footage taken at the scene in Avenida Miguel Cano and posted on social media portrays the horrific incident. A woman covered in blood can be seen lying on the ground while others attend to her. Chairs and tables are turned upside down and a waitress can be heard screaming. A white car appears to have crashed into a storefront. The video shows a distressed woman crying while others hold her back from getting to the vehicle. Police and paramedics can be seen behind a cordon.

According to reports, the car rammed into people walking along the boulevard which is lined with shops, restaurants and cafés.

Five people were reportedly injured, one seriously, and have all been take to the Costa del Sol Hospital.

However, one witness said none of the victims appeared to have been seriously hurt.

An employee of a pub on the street told Okdiario Andalucia the car was going “very fast” when it ploughed into the terraces.

The person said: “He has run over all the tables on the terrace, and run over people.

“But there are no very serious injuries, the ambulance has taken several but no deaths at the time or anything tragic.

“Much more could have happened.”

The bar worker claimed the suspect appeared to be around 30 was “travelling with his parents in the car” when he rammed people.

READ MORE: US Capitol building on lockdown after car rams into police officers

She posted photos which appeared to have been taken from a nearby balcony.

Several ambulances and at least one fire brigade can be seen near where a car appears to have crashed into the front of a jewellery store.

A policeman can be seen guarding a cordon, preventing onlookers from getting closer to the scene of the crash.

She said she heard an “awesome rumble” caused by the car “trampling everything in its path”.

She also claimed the driver had been arrested, adding: “The occupant of the vehicle faces the police who have to take it away. Confusion. Horror.”

A police spokeswoman told The Associated Press that officers arrested the driver and are investigating the incident.

The front window of a jeweller’s appears to be smashed after the car rammed into it.

Nearby, crowds of shocked onlookers gathered outside the police cordon.

Miguel Cano Avenue is one of the main streets of the city of Malaga, a popular tourist destination for both domestic and international travellers.

So far this summer, Spain has not experienced its usual influx of British tourists due to Covid restrictions.

Under the current rules which came into effect today, only fully vaccinated Britons are exempt from quarantine requirements when they return to the UK from Spain.

Everyone else has to spend 10 days in self-isolation.