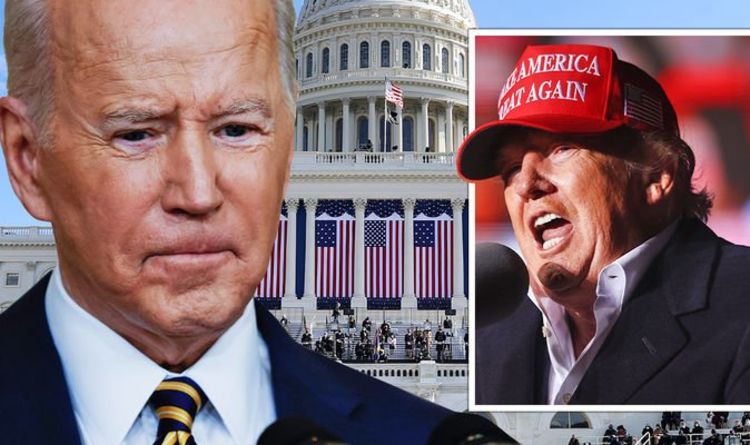 The news comes as the US President enters his second year in office, with mixed opinions as to his performance. While many hoped Mr Biden would unite America following Donald Trump’s tumultuous term as President, he has come under fire after his first year.

Political commentator, Nile Gardiner claimed: “Once hailed as the man who would “restore America’s standing in the world, Biden is overseeing the stunning decline of the world’s superpower.”

He added: “A year after taking office, he is flailing at home and abroad, and could well end up a lame-duck halfway through his presidency.”

The real test for the president will come in the mid-term elections.

Currently, the president finds himself at the lowest polling point of his tenure.

According to a new poll by Gallup, Mr Biden’s approval at just 40% with 56% disapproving. It’s the lowest measure so far by Gallup and well below his 48.9% polling average over the past year in the organization’s surveys.

With the test ahead looming, Mr Gardiner, writing in The Telegraph claimed: “If the Republicans take the House of Representatives and Senate in the mid-term elections later this year, Biden will be practically powerless on the domestic stage to further implement his agenda.

“He will be reduced to conducting America’s foreign policy, which is already proving to be a monumental disaster.”

He argued: “In the wake of the Afghanistan withdrawal debacle, America’s standing has sunk to lows not seen since the end of the Vietnam War.

“Even the Carter days look benign compared with the feckless Biden era.”
Also on the international front, Mr Biden is seen as weak by the USA’s so-called “enemies.”

He added: “As for America’s enemies, they see Biden as a soft touch, whose time in office is a welcome opportunity to challenge America’s might and undercut the country’s strategic power.

“It is no coincidence that, with the former senator from Delaware in the White House, Russian forces are massing on the border of Ukraine, China is openly threatening to invade Taiwan, and Iran is rapidly building up its nuclear programme.”

Mr Gardiner went on to brand Mr Biden’s domestic agenda “reckless”, arguing: “Biden’s weakness abroad has been matched by a reckless domestic agenda that plays to the far-Left of the president’s own Democratic Party.

“A huge expansion of government spending and massive increase in federal debt has helped fuel the biggest rise in inflation in 40 years.

“Americans have faced a 7 per cent overall increase in prices in the past year, with supply-chain issues resulting in the first major shortages in US supermarkets in several decades.”

He added: “Against this backdrop of economic turmoil, major cities across the country are experiencing soaring crime rates, the direct result of foolhardy Democrat-led “defund the police” initiatives and dangerous liberal sentencing policies.

“Looting has become so commonplace in San Francisco and Los Angeles that it barely makes the national news bulletins.”

“With good reason his poll numbers are tanking, and the American people are increasingly turning against the most Left-wing presidency in US history.”