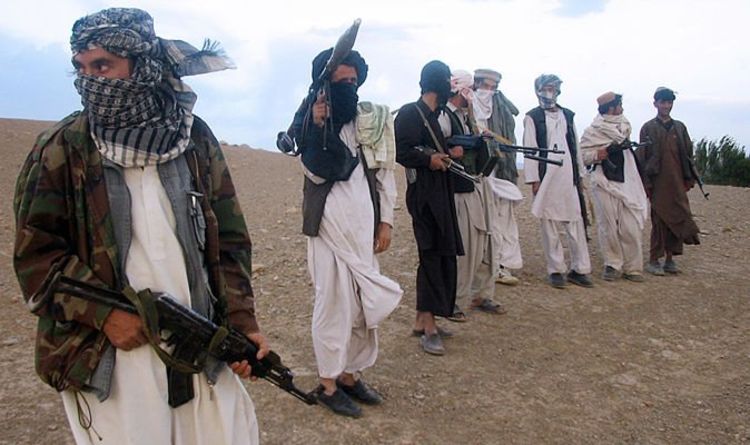 It follows the fall of two other cities on Saturday and Friday, raising fears of an Afghan government collapse. President Biden has announced all US troops would be withdrawn from the country by the end of August.

NATO allies have also removed their forces, allowing the Taliban to seize much of the country.

After initially capturing rural areas, they are now turning their attention to provincial capitals across Afghanistan.

They later continued their conquests by capturing nearby Taloqan, the main city in Takhar province.

The Taliban have made lightening gains across Afghanistan (Image: GETTY)

The Taliban’s recent spate of victories began on Friday when they seized Zaranj, the first city they have controlled for several years.

On Saturday, they followed this up by capturing Sheberghan, provincial capital of the northern Jowzjan province.

Five Afghan cities are now under Taliban control, by far the most since they were removed from power by a US led invasion in 2001.

All of Kunduz, a city of around 375,000, bar the city airport has fallen to the Taliban.

READ MORE: EU accused of turning back on Afghan interpreters – ‘Fear for my life’

Afghan forces are trying to hold back the Taliban advance (Image: GETTY)

The group’s flag was raised above its main square, with a resident describing the situation as “total chaos”.

Taliban fighters have also been attacking the cities of Herat, Lashkar Gah and Kandahar.

The latter, Afghanistan’s second biggest city, is considered by many to be the birthplace of the Taliban.

However, many of the group’s recent gains have been in the north, away from their southern Pashtun heartlands.

Afghan troops have been forced out of several cities (Image: GETTY)

Some of the areas captured were still under control of the Northern Alliance, an anti-Taliban militia, when the US invaded in 2001.

Afghan forces have been supported by US airstrikes, which pounded Taliban positions in Lashkar Gah on Sunday.

The Afghan defence ministry claimed these killed 54 Taliban fighters and wounded another 23.

There are unconfirmed reports a health clinic and school were damaged by the bombardment.

Taliban is ‘more powerful than ever’ says commentator

Lashkar Gah is capital of Helmand province, where thousands of British troops battled the Taliban for years before withdrawing.

In a statement, Major Nicole Ferrara, a spokesperson for the American Central Command, said: “US forces have conducted several air strikes in defence of our Afghan partners in recent days.”

Donald Trump signed a peace deal with the Taliban in 2020, pledging to withdraw US troops in return for the group entering talks with the Afghan government and pledging not to harbour Al-Qaeda terrorists again.

However, there are already reports of foreign extremist groups fighting alongside the Taliban.

The Taliban provided sanctuary to Al-Qaeda before the 9/11 attacks (Image: GETTY)

The Taliban’s alliance with Al-Qaeda, who used Afghanistan to plan and train for the 9/11 attacks, provoked the 2001 US invasion.

President Biden decided to push ahead with the withdrawal, despite fears about Taliban gains.

One counter-terrorism expert tweeted: “Al-Qaeda chatter and media has been a 24-7 hype party for the Taliban and its victories.

“In some ways, it feels like the earlier days of the Syria Civil War amid Nusra Front’s [Al-Qaeda] victories – except now on a completely different scale, given the Taliban’s horrifying momentum.”