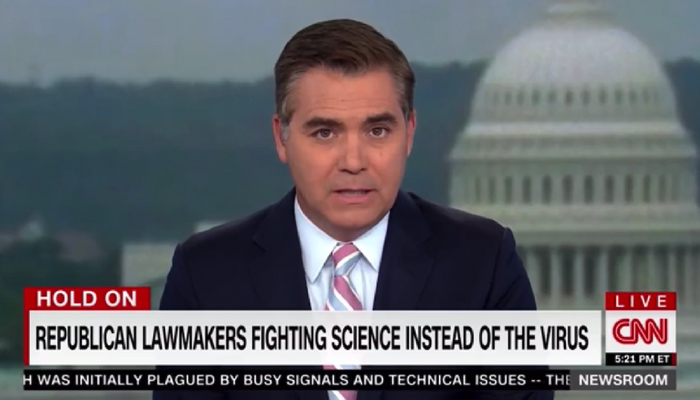 It appears that very low CNN ratings could be causing their chief domestic correspondent Jim Acosta to go even further over the edge than he already is. He’s gone from yelling at President Trump to the wasteland of late afternoons on the weekends.

To grab liberal attention and praise on Saturday’s CNN Newsroom, Acosta even went so far as to suggest that new COVID variants be named after Republican officials, like “the DeSantis variant,” after the governor of Florida.

First, Acosta played a clip of Ron DeSantis telling President Biden to get a grip on the border before he lectures about COVID. Acosta — yes, the man who screamed like a child in the Rose Garden — suggested DeSantis was childish. “What about the border? It sounds like I know you are, but what am I? What’s next? I’m rubber and you’re glue? Nana boo boo? Not exactly a JFK profile in courage moment.”

This show is called Newsroom, but Acosta’s hours sound like Ranty Room. The graphics on screen over his latest rant at Republicans killing people with COVID was “Republican Lawmakers Fighting Science Instead of the Virus.”

JIM ACOSTA: Take a look at this. DeSantis is a graduate of Harvard Law and Yale, [Sen. Josh] Hawley went to Yale Law and Stanford, [Sen. John] Kennedy studied at Oxford, UVA, and Vanderbilt. Anybody who’s gone to an elite university not only passed a science class, but should also value expertise. And the experts are telling us to listen to the science, that it’s better to be vaccinated, that masks will help in areas where COVID rates are soaring. And yet some of these GOP leaders won’t say the science part out loud.

Just the other day and we’ve been talking about this, this afternoon, an 11-month-old girl in Texas, another heart had state had to be flown 150 miles away for treatment because hospital beds are full in her town. People should not have to die. So some politicians can own the libs. They’re not owning anybody. But they may end up owning the pandemic. Because they’re prolonging it.

Perhaps it’s time to start naming these new variants that may be coming out after them. Instead of the Delta variant, why not call it the DeSantis variant? We could sell beer koozies that say don’t Florida, my Fauci, and use the money to help pay for all the funerals that’ll be coming in the days to come.

Perhaps we should call media TDS the Acosta Syndrome due to Jim Acosta’s propensity for spreading fake news about Donald Trump. One example involving COVID came in a CNN article slamming Trump that he co-wrote on May 1, 2020 titled, “Trump contradicts US intel community by claiming he’s seen evidence coronavirus originated in Chinese lab.” That sure did not age well, Jim.

Jim Acosta’s soapbox rant was brought to you by Subway. You can “own the cons” in six inches or twelve.