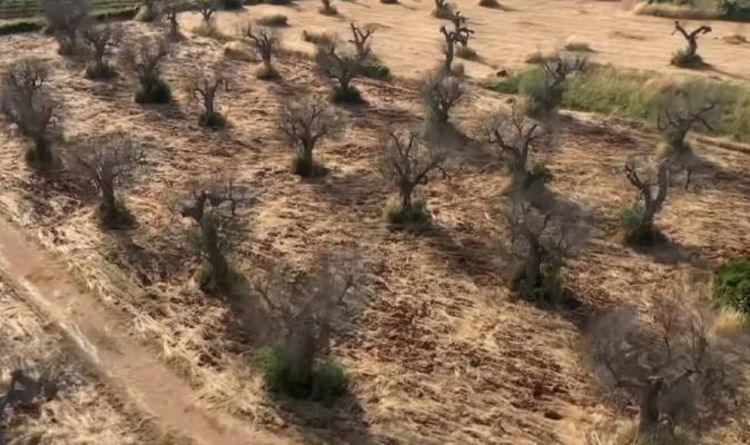 The deadly disease is called Xylella and sentences olive trees to death sparking fears of the industry collapsing entirely. Speaking to ITV News, reporter James Mates explained how the disease has sent the olive oil industry in the region of Puglia, Italy into chaos as the disease kills every tree it infects. The disease is carried by the flying spittlebug and is believed to have arrived in Italy in 2013 from abroad. Farmers are now starting from scratch and planting disease-resistant olive trees in order to fight back against the bacteria as reserves of olive oil dry up.

Mr Mates said: “[The] terrible infection has been rampaging through the olive groves killing almost every tree it touches.

“Even magnificent olive trees that have stood for 400 years are not immune.”

He explained how there is “neither treatment nor cure for Xylella” adding that “once infected an olive tree is doomed.”

It is thought the disease arrived in Puglia in 2013.

Mr Mates stressed how “almost certainly” the disease landed in Italy via a consignment of olive trees from Costa Rica.

He said: “Vast swathes of this province are now a wasteland for olive farmers.”

And speaking to ITV, Giovanni Malcane, an olive grower, explained how he has had to take the tough decision to replant entire olive groves with bacteria resistant trees to avoid repeating such a catastrophe in the future.

Showing acres of new olive trees he has planted on his farm, he explains how growers like himself have been left with little other option in order to keep themselves afloat after having their groves “decimated” by Xylella.

According to the Royal Horticultural Society, the bacterium Xylella fastidiosa causes disease in a wide range of plants.

The bacterium can infect more than 560 different plant species and causes symptoms including leaf scorch, wilt, dieback and plant death

It has not been detected in the UK but there have been major outbreaks in mainland Europe.

But the RHS add how there are serious concerns about the risk of the introduction of Xylella via infected host plants imported into the UK.