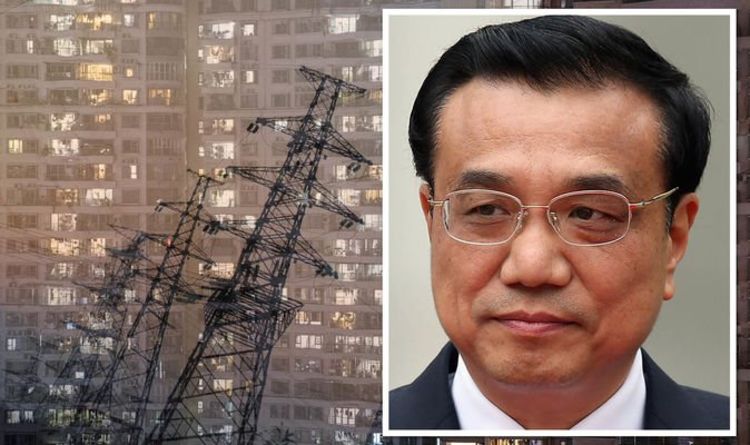 China is desperately seeking help in a bid to boost its electricity supply as the world’s largest nation experiences widespread power cuts which have plunged citizens into darkness. Russia is the main supplier of crude oil, natural gas and solid fossil fuels to EU member states – accounting for 41 percent of imports. Beijing has reportedly demanded energy supplies from the country to keep factories working at all costs.

The gas crunch has hit many nations around the world including the UK, Europe and China.

China’s factory activity has shrunk amid curbs on electricity use and rising prices.

Blackouts are not unusual in the country and now millions of homes and businesses have been hit by these power cuts.

The nation has struggled in the past to balance electricity suppliers with demand and the supply problem has become particularly acute during peak power consumption months.

This was after the nation recorded a series of blackouts and shortages which forced companies to restrict output.

Central Government officials ordered state-owned energy companies to secure suppliers for the winter at all costs.

The move from China suggests other parts of the world could face an even trickier time securing the energy and fuel they need.

In efforts to ensure the lights are not turned off, China has asked Russia to boost its electricity supply.

Beijing has requested these supplies to the northern provinces of the country which has been most affected by the blackouts.

Russia gas flows to Germany’s Mallnow terminal dropped on September 29 with suppliers estimated to be around a third less than at the beginning of the week.

European utilities are seeking to buy more coal from Russia – but are to be disappointed as any exports are likely to be limited.

The challenges in the European gas market have been brewing for some time.

A prolonged winter drained storage and then a lack of liquified natural gas caries have meant stocks have not been rebuilt to normal supply levels.

Lower pipeline supplies from Russia and a sharp fall in domestic output have heightened fears for the winter months.

The surge in prices for liquified natural gas, which hit a record high on Thursday of $34.47 per million British Thermal Units, has pushed up European and UK gas prices.

Buyers in Asia have been prepared to keep paying premium prices thus far to lock in cargoes, but the bidding war between Europe and Asia has boosted prices further.

In China’s domestic spot market, coal was changing hands at Rmb1,700, or $263 a tonne on Thursday, according to Argus Media, a price reporting agency.

Demand for fuel in China has risen by almost 15 percent in 2021 according to Morgan Stanley.

However, its domestic coal supply has climbed just five percent this year to date.

Coal is still by far the largest source of electricity generation in China.