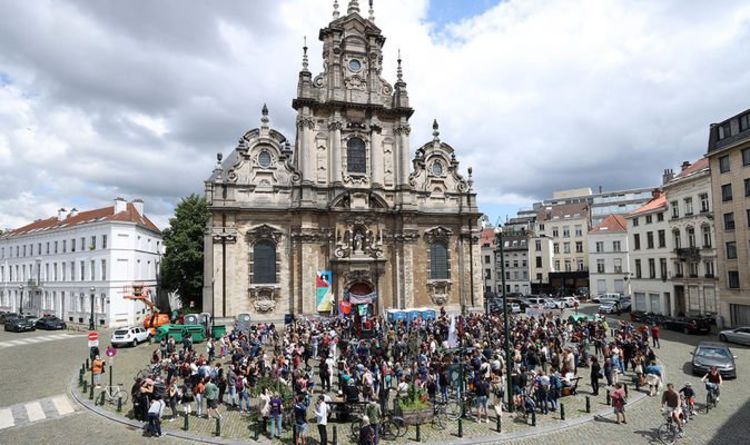 According to the latest reports, 470 migrants are taking part in the hunger strike, most of whom are holed up in a church or on a university campus in Brussels. The strike has been underway for two months, but with some said to be refusing water and now close to death, the crisis is spilling over into the federal government.

The migrants involved in the strike are all reportedly illegal immigrants, but some have been living and working in Belgium for years.

They are demanding the collective right to enter the formal economy as legal residents.

The Belgian government has refused their demands, saying each case would be considered on its own merits.

But now, with doctors fearing some of the strikers are close to death, a number of government ministers have said they would resign if there are any deaths among the group.

Ministers representing the Green and Socialist parties within the federal coalition said on Monday that they would resign “within the hour” if a hunger striker died.

The government is widely expected to fall if they do.

A representative of Doctors Without Borders said: “Their condition is such that death could come at any moment.”

The hunger-strikers, who call themselves We Are Belgium Too, are four-fifths men, one-fifth women.

They mostly come from Tunisia, Morocco and Algeria, with a few come from Nepal and Bangladesh.

They have written to the Belgium King asking him to intervene, saying they only wanted the right to “live with dignity in a country they have helped build”.

Many have lost their hospitality jobs as a result of the pandemic.

They were working in the informal economy, without contracts, and so had no right to government compensation afforded to citizens to manage to Covid crisis.

But the government is yet to show any signs of yielding.

Migration minister Sammy Mahdi said: “The use of a hunger strike will not change the rules.

“Those who are without papers are invited to come and sort out their dossiers individually.”

The minister has also refused a call by activists for the group to be given temporary residency permits on humanitarian grounds.

One striker, 53-year-old Ahmed, told the EUObserver: “We are people, we need to be treated with humanity and not like slaves.”

“We have been subjected to arrests and disproportionate violence,” he said of the Belgium police.

The strike is growing more dramatic, with many now refusing water and some stitching their lips together. Most haven’t eaten since mid-May.

Over the weekend, ambulances lined up in front of the Saint John the Baptist at the Béguinage church in Brussels to evacuate the more serious cases, some of whom were taken out on wheelchairs.