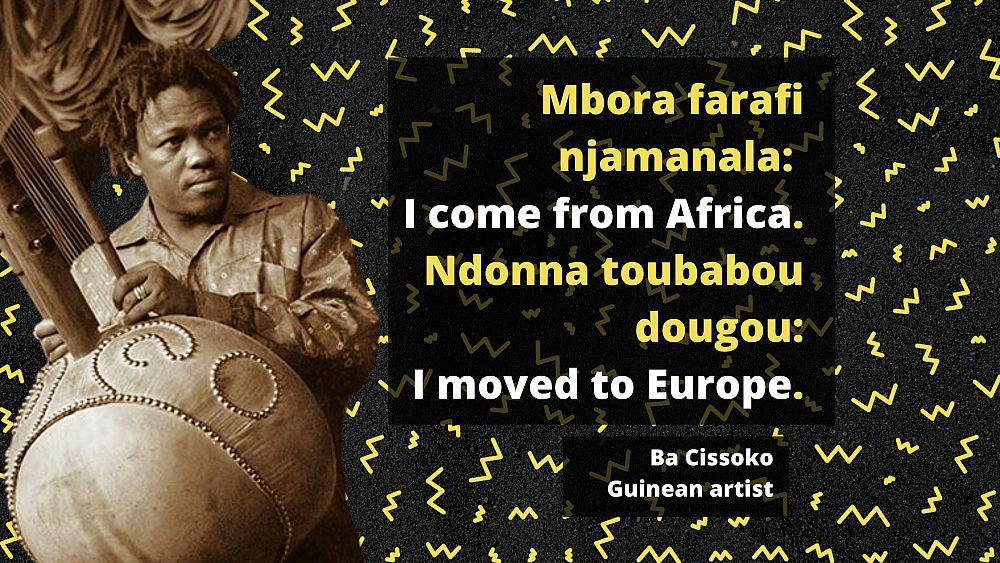 “There are lots of young people who are in Africa who think it”s easy when you come here. It’s not easy at all,” Guinean musician Ba Cissoko tells Cry Like a Boy.

For several years now, many Africans have been aspiring to emigrate to Europe in order to try their luck to have a better life. Some succeed, but many die during the migratory journey.

Accompanied by his kora), an instrument and emblem of Mandingo culture, Guinean artist Ba Cissoko and his music band travel the world sharing their culture. He lives in France and travels back to Guinea when he can. In their music they use a mixture of the sound of the kora with rock, reggae and blues influences. Their lyrics are written in the main Guinean languages: Malinké, Sousou and Peul.

In his latest single “C’est pas facile” he addresses the African youth to make them aware of the real and rather difficult conditions of life in Europe as an immigrant.

Being a griot, a storyteller in local African communities, he felt obliged to honour his tradition, his blood, his community. His father played the kora, so did his great grandparents, It was passed down from father to son. Tradition requires griots to be communicators, professional musicians, storytellers, and therefore guardians of tradition. When they perform, the griots accompany their songs with the kora. But they also pay tributes to highly ranked families using this instrument.

For our Cry Like A Boy podcast we talk to the Guinean artist about his background, the importance of the kora in his community and the struggles migrants face.

Euronews: What is your connection to this instrument?

Ba Cissoko: This old instrument that I found in my family is called the kora and has strings. It is an instrument that is played and passed down from father to son. I saw my father playing the kora, but I was passionate about football. He used to say to me: “It’s not bad to play football, but as the son of a griot, you have to play like our parents and our great grandparents.”

So I thought I had no choice, and it was the great master M’Bady Kouyaté, my uncle, who taught me to play the kora. I used to play at the national theatre as a child. I started playing the kora there until I had the chance to form my own band, and then travelled around the world with my kora.

Euronews: So what does the kora represent for you as an instrument? As a tradition?

Ba Cissoko: Frankly, I love the kora because it’s an instrument that I found in my family that my father plays. And when I’m not feeling well, I go and play the kora, it relaxes me, it makes me travel and it does me good.

This instrument is special, when there are weddings, baptisms in a village or in a town, the griot takes his kora and goes there. They play for the event and the court. It is an instrument that is really appreciated in the Mandingo tradition, but also everywhere in the world.

Euronews: When did you start to expand your career internationally? When you arrived in France, in Europe?

Ba Cissoko: I extended my professional career internationally when I came to Marseille for the first time in 1995, for a festival called No Quartet by the association Nuits Métisses which took us there to meet French musicians. That’s how I came to France.

I have travelled all over the world thanks to my kora and my music. It’s a pity, though, because with the COVID it’s quiet, otherwise I travel often. I like to travel.

Euronews: And how would you describe your style of music?

Ba Cissoko: The basis of my musical style is Mandingo music. The Mandingo empire extended over Senegal, Gambia, Guinea, Burkina Faso and Mali. But today when we say “Mandingo” we refer to Guinea. But otherwise it’s modern Mandingo music because it’s a mixture of jazz, rock and roll with the kora. It’s a mixture of Mandingo tradition and modern music.

Before coming to France, I played in hotels. I used to do animations with the kora and I formed a small group of four people. There were three acoustic guitars with the kora. Often in the hotel there were guests who asked for well-known songs, blues, jazz, salsa. So I worked a lot and that’s how it happened. I managed to integrate my kora with modern music.

I created my own style afterwards and played with my cousins. There were four of us so there was a bit of everything in our music.

Euronews: Is there a subject that inspires you the most when you write your songs?

Ba Cissoko: You know, every time I’m in Africa or in France or somewhere in the world, I see what’s going on, I see the news. For example, the song I sang recently is called “C’est pas facile” where I tell what is happening in immigration by saying that “C’est pas facile”. And with the trips I’ve made, I’ve seen immigrants all over the world, and the life they lead is not easy. That’s why I sang in Mandinka, my mother tongue, mixed with French. In Mandinka I say: “mbora farafi njamanala” I come from Africa, “ndonna toubabou dougou” I came to Europe. I said “mais eh djo c’est pas facile”. That’s something I really wanted to sing because there are a lot of young people in Africa who think that it’s easy when you come here, that everything is smooth. It’s not easy at all, it’s a message I’m sending out for everyone to hear.

Euronews: Why was it not easy for you? What do you miss the most?

Ba Cissoko: It’s not easy to live in music, it’s too hard. You need a lot of courage. But you have to persevere and if luck is on your side you will succeed.

Euronews: What is the biggest success, if I may say, that you have had in your career, what was the moment when you thought, wow! I’ve arrived?

Ba Cissoko: It was when I released my first album Sabolan. Sabolan made me travel all over the world, I really had no time. When I came back, it was for two days and then I was on the plane. And I was doing big concerts, where I was with 25,000 people. I thought it wasn’t real because I saw it as a dream. So I’m happy. I also participated in big festivals.

I had to organise my kora and string festival for four editions, and I had a cultural centre: Wakili Guinea. Wakili means courage. Wakili trained many young people to play the kora, and to make the kora. There are many young people who came out of Wakili and had the chance to travel. With my brother Mamco, we want to relaunch this project.

Euronews: And this is planned for 2022, if the situation allows it?

Ba Cissoko: Yes, if everything goes well, we hope so. If it works out everyone will be happy. In any case, this is the project I have for the moment and also to make recordings to make a new album. I am creating and preparing things.

Euronews: What is the future of your career, how would you like to get there?

Ba Cissoko: I’d like to go further than where I am now, I’ve done a lot of things, travelling and I’m still going. I’m going to set up a duo with my brother Mamco and see what it will be like. I also have to go to Tanzania, to Zanzibar, for a festival on June 5, inshAllah. All these are projects that are coming up.

My brother plays the kora too, and he sings like me. I play several instruments including the n’goni. I play a bit of acoustic guitar and tama. I play more than three to four instruments but the kora is my instrument. We will do a mix, there will be two kora, one n’goni kora and the strings. A kora accompanied by a tama and then we’ll come back to the kora, that’s how we’re going to tour.

Euronews: And what is it like to be a musician in Guinea?

Ba Cissoko: When you’re a musician in Guinea, you fight and beat yourself up to be recognised. People respect music in Guinea. When you are known, everyone respects you. It’s a pleasure. Sometimes we are invited to concerts. It’s very good because in Guinea people like music.

Euronews: Are you able to return to Guinea?

Ba Cissoko: Yes of course I go back from time to time, I’m here at the moment but I’m going to try to go to Guinea before my trip to Tanzania.

Euronews: Do you have an anecdote or a moment that really marked you with this instrument?

Ba Cissoko: You know I started learning the kora with my uncle so I know the whole tradition of the kora. With him, what marked me since he explained to me how to take the traditional kora, I took my kora and I put it on my back as it is the tradition, and we walked from village to village. In each village, we went to play at the village chief’s house and we continued like this until we went to Gambia.

In Senegal we arrived in Casamance in a family of griots, with many young people playing the kora. There, I had the courage and I said to myself: “ah wai, this is the tradition”. The great master said to me: “here is the tradition, you’re going to take your kora and do whatever you’re asked to do.”

It’s something that marked me so I have memories of it.

Euronews: How old were you at the time?

Euronews: That’s when you started?

Euronews: And football, did you leave it behind?

Ba Cissoko: Finally, I didn’t become a professional but I still like to go and play a little time, time for sport.

Euronews: Do you have a message for future musicians who are just starting out, who are looking at your trajectory, and who will be inspired by your music?