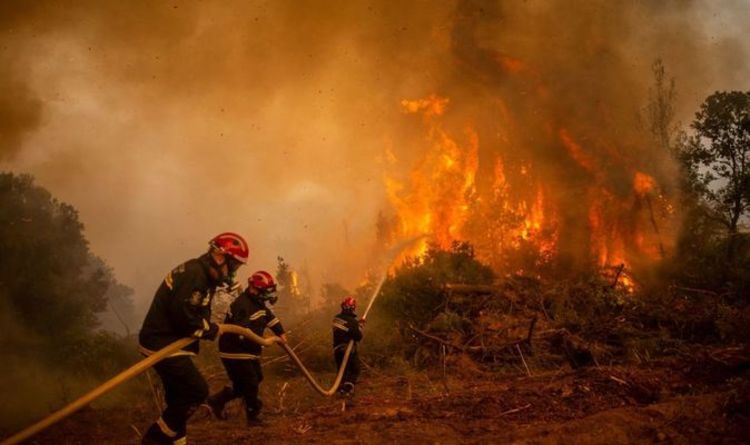 Speaking to Times Radio, Karolina Tagaris, correspondent for Reuters in Athens, explained how Greek citizens desperately escaping the ravaging wildfires on the Greek island of Evia have resorted to pleading on live TV to demand more help from the Greek authorities. She explained how citizens are furious about a shortage of firefighters and fire response units in Greece as the fires, which have raged for 11-days, burn through more and more homes and livelihoods. She added that as a result of the slow response it is impossible to say when the fires will be brought under control.

Ms Tagaris said: “The people we have spoken to on the ground are very angry.

“And more firefighters on the ground.”

She went on to explain how the situation has become so dire that evacuees are being forced to leave by boat as they demand the authorities do more to tackle the country-wide blazes.

The correspondent said: “These sea rescues needed to happen because the fires had cut off any other means of escape from those villages.

“The only way for them to leave was from the shore so these operations were organised by the coastguard.

“And for many people in those seaside villages, it really was the only means to a safer area.”

She added: “A lot of people are angry, they feel it is not enough, or that perhaps authorities did too little too late.”

And in a sobering moment, she explained how evacuees have lost everything as the government falters in responding to the apocalyptic damage the fires have brought to the country and its people.

She said: “Many have lost their homes, their businesses, their livelihoods.

“So there is a lot of anger among the people who have had to flee.”

The Reuters correspondent added how one person said the Greek government have “abandoned” the country’s people while Greece’s Prime Minister Kyriakos Mitsotakis has warned the country could face a “nightmarish summer” of continuous forest fires.