Sen. Cory Booker was flat-out giddy along with every other Democrat to make Tommy Tuberville’s amendment blow up in his face.

Sen. Cory Booker jumps with joy as Tommy Tuberville’s amendment trying to get Democrats on the record as supporting defunding the police blows up in his face. Tuberville shows why failed football coaches make really bad Senators. https://t.co/H0Ttk67gQm 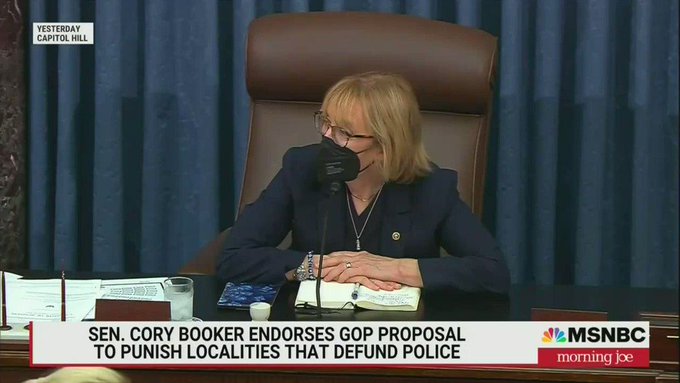 Booker said on the Senate floor in response to the Tuberville amendment that would punish localities for defunding the police:

I am so excited. This is perhaps the highlight of this long and painful and torturous night. This is a gift. If it wasn’t complete abdication of senate procedures and esteem, I would walk over there and hug my colleague from Alabama. And I will tell you right now, thank god, because there’s some people who have said that they’re members of this deliberative body that want to defund the police to my horror.

And now this senator has given us the gift that finally once and for all we can put to bed this scurrilous accusation that somebody in this esteemed body would want to defund the police. Let’s not all of us, but 100 people sashay down there and vote for this amendment and put to rest the lies that I am sure I will see no political ads attacking anybody here over defund the police. And I would ask unanimous consenting to add something else to this obvious bill. Can we add also that every senator here wants to defund the police, believes in God, country, and apple pie. Thank you.

The Senate voted 99-0 for Tuberville’s amendment.

There is a big difference between reform and defunding the police. Democrats support police reform so that cops stop killing people for being black. Democrats support getting rid of bad cops and giving local police departments the tools for success in their communities. Democrats support ending deadly and dangerous uses of force that kill innocent people daily.

Democrats do not support defunding the police.

Sen. Booker has been tirelessly working on police and prison reform for years, so when Tuberville, who is in the running for dumbest Republican Senator, gave Democrats an opening to put the defund the police lie down, they jumped all over it.

The move blew in the GOP’s faces, but that won’t stop them from continuing to spread the defund the police lie.