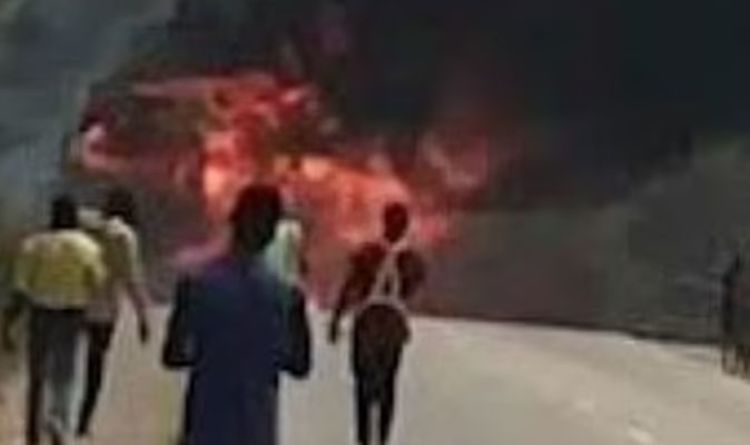 The accident happened around noon in Apiate, near the mining city of Bogoso, 180 miles west of Ghana’s capital Accra. As rescuers combed the scene for survivors, videos posted on local media showed hundreds of buildings reduced to piles of wood, rubble and twisted metal, with dead bodies on the ground, surrounded by debris. The government confirmed the explosion was caused by the collision of a truck carrying explosives to a gold mine with a motorcycle. While the exact number of casualties has not been confirmed, Isaac Dsamani, head of the Prestea Huni-Valley municipal government where the explosion took place, said officials had counted “about 17 dead bodies” so far.

Mr Dsamani added: “Some of them were in their rooms, and then they were trapped.

“We were able to rescue some of them. Some of them too, unfortunately before we rescued them they had already gone.”

Survivors in critical condition — at least 57 were injured — are being evacuated to medical facilities in Accra, emergency officials claimed.

Nearby hospitals and clinics were overrun with victims, they added, and police have asked surrounding villages to open their schools and churches to accommodate any further casualties.

Dr Joseph Darko, working at Apiate hospital, told AFP five of the casualties, “including a five-year-old child who is in a life-threatening condition”, had been taken there.

The Ministry of Lands and Natural Resources said in a statement it is investigating the cause of the blast and looking into whether the companies involved followed regulations covering the transportation of explosives.

The mine was run by Toronto-based firm Kinross Gold Corporation, and a company spokesperson confirmed the incident, claiming it occurred 87 miles from the site.

According to eyewitnesses, a driver involved in the accident tried to warn local residents to flee after the motorcycle caught fire because of the collision.

M Dsamani said: “So the driver got down and was telling people to run away.

“And some people was trying to find out what was really happening. While the driver was shouting that people should run away … in about 10 minutes’ time, the whole thing exploded.

“So people who had tried to arrive to the scene were the people who were mostly affected.”

A police statement read: “Preliminary investigation has established that a mining explosive vehicle … collided with a motorcycle resulting in the explosion.

“The public has been advised to move out of the area to nearby towns for their safety while recovery efforts are under way.”

The explosion has sent shockwaves through the West African country, with Seji Saji Amedonu, deputy director-general of the National Disaster Management Organisation (NADMO), confirming more than 500 buildings had been destroyed.

“As we speak, the community is dead, it cannot be inhabited by anyone.”

President Nana Akufo-Addo described the blast in a statement as “a truly sad, unfortunate and tragic incident” that had resulted in “the loss of lives and the destruction of properties”.

He added: “Government will spare no effort to ensure a rapid return to a situation of normalcy for residents of Apiate.”

A hugely deadly explosion killed more than 150 people in the capital in 2015.