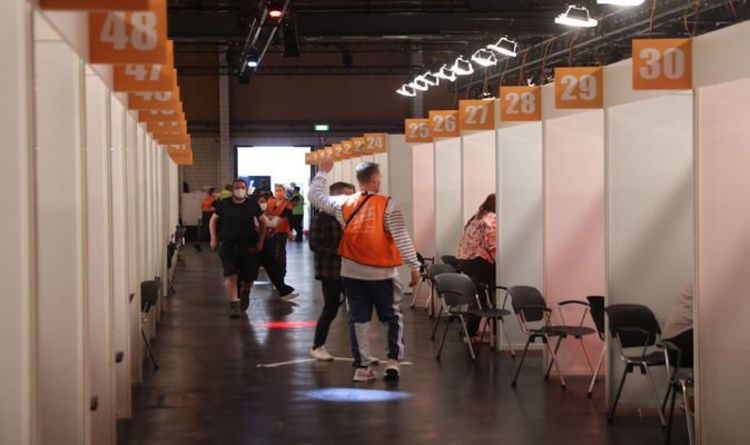 Free rapid coronavirus testing which has been widely available for months in Germany and has been used to get punters into venues such as football stadiums will be slashed from October 11 as the ruling CDU party say the cost is “not justifiable” anymore. After that date, all the unvaccinated – apart from kids, those who are pregnant or people medically exempt from the jab – will be forced to pay up for rapid tests. Both jabbed and unjabbed German’s will still be able to access longer turnaround testing but the hope is that the new plans will force people to no longer rely on the rapid test system as a way of dodging getting a vaccine. The move comes as Ms Merkel desperately tries to get the German population jabbed as only 55 percent have received two doses of the vaccine.

Speaking at the Christian Democratic Union headquarters, CDU Secretary Paul Ziemiak said Germany was at a stage where it is no longer viable to give its population free test handouts with the bill picked up by the state.

He said: “In the question of testing and vaccination.

“We are now in the situation where everyone who has the opportunity to be vaccinated should do so.

“We propose that starting in October Covid tests should no longer be free but should be paid for.”

JUST IN EU shame: Nearly 700,000 AstraZeneca doses NOT used in one German region

He insisted: “It is not justifiable that the tests should be financed with public money.”

While a CDU spokesman told reporters at a coronavirus press conference on Tuesday: “The time for tighter measures for those who are not vaccinated will continue to be decided on by the federal government and the states.”

The new plans were scrambled together by Ms Merkel and the leaders of Germany’s 16 states.

The plans also mean that the government reserve the right to tighten Covid rules further if the infection rates in Germany continues to spiral out of control as it is at the moment.

It comes as Germany’s Covid incidence rate for every 100,000 people over seven-days has almost doubled in the past three weeks as the virus spreads rapidly across the country.

READ MORE ‘Sympathy from us? Not a hope in hell!’ Britons mock Germany

Only 55 perncet of Germans have received a full vaccination, which includes 80 percent of people older than 60.

While 62.5 percent of Germans have had at least one jab.

German Health Minister Jens Spahn said how nearly a quarter of 12-17-year-olds have had one jab, which equates to more than one million people.

But the figures fall drastically short of Merkel’s goal for 85 percent of the population to be fully jabbed by the end of the summer.