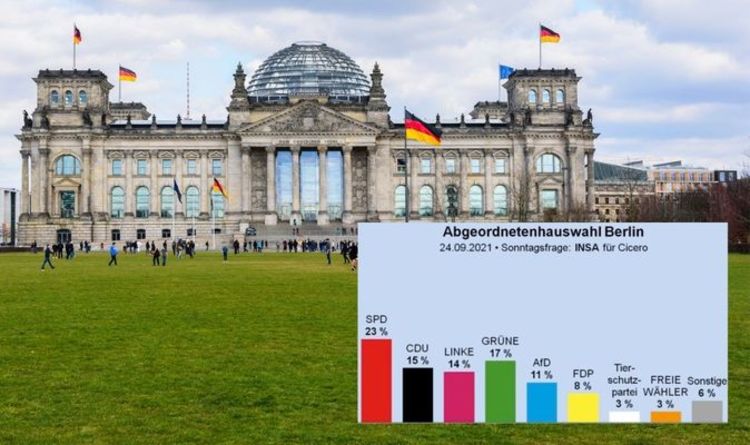 The German elections are just around the corner and the exit polls look closer than ever. These elections will be monumental for Germany as Angela Merkel, who has dominated European politics, will step down after 16 years as chancellor. But who will succeed her remains unclear.

Unlike British politics where an outright majority is usually won, the German parliament is typically made up of two or three coalition parties.

Germany uses a mixed-member proportional representation system in its elections.

This combines first-past-the-post elected seats with a proportional party list to make sure the composition of its parliament mirrors the national popular vote.

After the elections on September 26, negotiations will take place with the party that secures the most votes and others smaller parties to form an overall majority.

In recent weeks Mr Scholz’s party has taken a narrow lead in the polls.

What do the latest polls predict?

According to the latest polls by wahlrecht.de, SPD is forecast to win 23 percent of the vote.

Support for the party has been falling since February this year.

It dropped further still when Armin Laschet was chosen as a candidate to take over from the much-loved Angela Merkel in April.

German federal elections are proportional, this means the vote share shown by pollsters should be seen as translating fairly directly to the share of seats in the next parliament.

Parties who fail to secure more than five percent of the vote, or if they do not win more than three directly elected constituency seats, aren’t given proportional parliamentary seats.