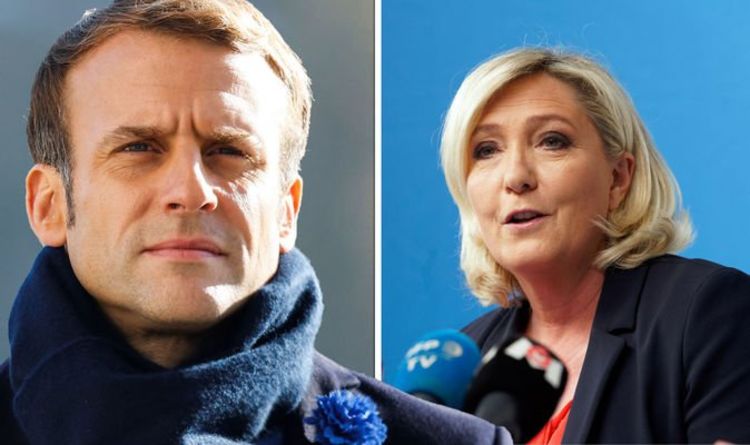 Emmanuel Macron is eyeing a second term in office next April but has met stiff resistance from established and new candidates this year. Marine Le Pen continues to stand in his way, leading a resurgence amongst far-right feeling also fostered by unofficial candidate Eric Zemmour. Only one of them has proven popular enough to survive, according to a recent survey by pollsters Elabe, while both have several points on former Brexit negotiator Michel Barnier.

The poll, conducted on November 24, found that Mr Macron is “still the favourite”, winning the most support of the 1,491-strong sample.

A varying number, between approximately 25 to 27 percent, could deliver him a victory.

Executives and those working “intermediate professions” form his primary backers, 28 and 27 percent respectively, followed closely by 27 percent of over-65s.

Mr Macron is not comfortable in his place, however, as Ms Le Pen is nipping at his heels.

The far-right National Rally leader has firmly established herself as the second favourite over the last year, occasionally rising to meet the incumbent President.

The Elabe poll shows between 22 and 24 percent of people would support her bid for the presidency.

Her numbers have come from younger working professionals, primarily those aged between 25 and 34, with 30 percent on her side.

Low-level workers have also come out in force behind her, with 40 percent offering their support.

According to Elabe, her latest total marks a gain of between two and four percent in total while Mr Macron is standing firm.

Their support would mean Mr Macron and Ms Le Pen would ultimately progress to the second round, where the latter candidate has closed the margin once again.

She would gain three points on the last poll, surging to 45 percent of the vote, while the President drops by three to 55 percent.

The 10-point difference between them means the coming race is hardly a close one, but Ms Le Pen is far from scraping the bottom of the barrel.

Mr Zemmour is the highest performer outside the two by several points, but with just 12 to 15 percent of the prospective vote.

His potential support has dropped by two points compared to last week.

As Mr Zemmour’s favour erodes, it will likely trickle into Ms Le Pen, allowing her to draw from a less fractured pool of right-wing voters.

Embarrassingly for Michel Barnier, he is several points behind Mr Zemmour, who has previously touted white nationalist talking points.

Elabe found he and Republican candidate Valérie Pécresse have settled on nine points each, placing them in a group with the least popular candidates.

The race has so far proven disastrous for the French left, which found barely any support amongst Elabe’s sample.

Jean-Luc Mélenchon has the highest support level at nine percent, followed by Yannick Jadot between eight and nine, socialist candidate Anne Hidalgo between four and five, and communist Fabien Roussel on two percent.