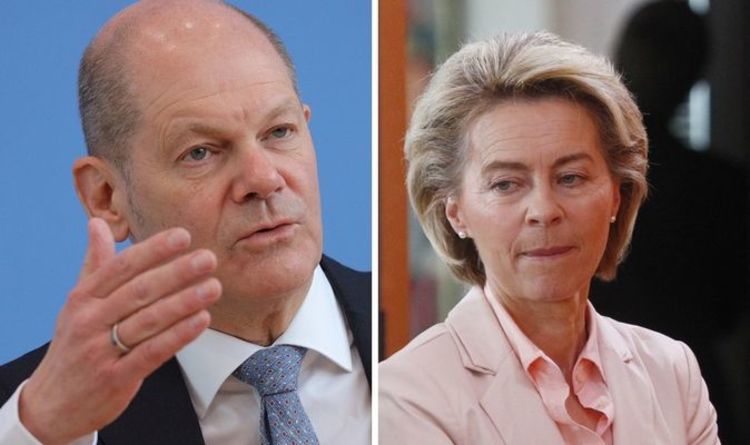 Germany will vote next Sunday to elect a new federal parliament with the result, after likely coalition negotiations, deciding who will succeed Angela Merkel as Chancellor. Mr Scholz of the SPD, the traditional centre-left party, would be the favourite to succeed Ms Merkel if Germany voted directly. According to Politico he is far more popular than main rivals Armin Laschet of Ms Merkel’s right-leaning Christian Democrat Union and Annalena Baerbock of the Greens.

In Germany however, once the public vote decides who is a member of the Bundestag (parliament), the newly elected representatives hold an exclusive vote in a secret ballot to decide the chancellor.

Mr Scholz, who is currently Ms Merkel’s deputy and finance minister due to their respective parties’ coalition, has had an impressive rise considering he was dubbed “Scholz-o-mat” in the early Noughties for his robotic demeanour.

In February this year, the finance minister attacked the European commission’s “really sh*t” vaccine strategy, according to German paper Bild.

He allegedly claimed Berlin could not “let this repeat itself” and that the vaccine rollout was a “disgrace”.

Mr Scholz’s party, the SPD had opposed Ms Von der Leyen’s appointment as commission president and claimed in a 2019 paper sent to EU peers that she was an “inadequate and inappropriate candidate”.

The same month as the reported claims made by Mr Scholz, he told the BBC that he was “angry” that the EU had not ordered more vaccines in 2020.

At the time EU countries had given a first vaccine dose to just under 4 percent of their population, compared to 11 percent in the US and almost 17 percent in Britain, according to Our World in Data.

“Among the hundreds of components needed, important ingredients are in short supply.

“We need to prepare today for a scenario in which the virus can no longer be sufficiently suppressed with current vaccines.”

She added that the fight against coronavirus was “not a sprint, it is a marathon”.

According to the European Centre for Disease Prevention and Control 78 percent of the EU’s population have had at least one dose of the vaccine.

Meanwhile the UK is 13th in rankings of percentage of population vaccinated, with 63 percent of inhabitants double jabbed.

The UK has also ordered more than 540 million doses of seven of the most promising vaccines, including the four that are currently approved for use.