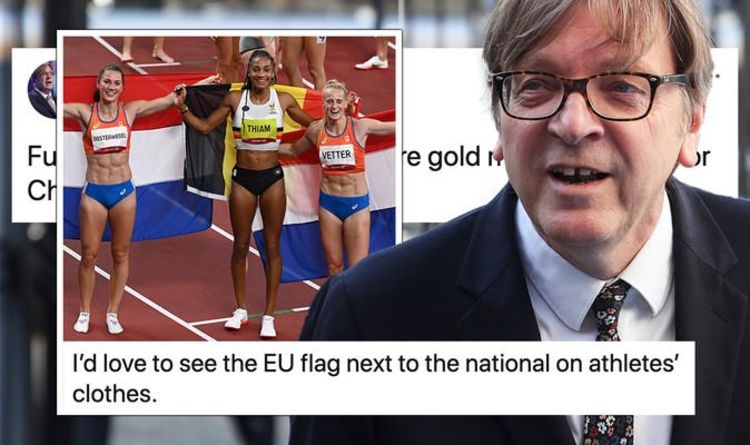 The MEP, the European Parliament’s former Brexit representative, has been a staunch critic of Britain’s decision to quit the bloc and has returned to the subject on numerous occasions since the 2016 referendum. And while he made no specific reference to Brexit in his latest tweet, he will have been well aware of the implications when he posted his most recent jibe online, according to Leavers.

He wrote: “Fun fact: EU combined has more gold medals than US or China #TokyoOlympics

“I’d love to see the EU flag next to the national on athletes’ clothes.

”Our identity is layered – we’re proud Italians, Latvians, Germans, Slovenians… and Europeans. Our sports should reflect that!”

Tory MP David Jones, the deputy chairman of Parliament’s European Research Group (ERG) told Express.co.uk: “To be fair to Guy Verhofstadt, he has never made any secret of the fact that he wants the EU to develop into a single superstate.

“His tweet merely confirms that. It also confirms that the UK was entirely right to leave an organisation in which zealots such as Mr Verhofstadt have such influence.

If Guy Verhofstadt did not exist, Brexiteers would need to invent him

“His Europe is obviously not a place where most Britons could ever feel at home.”

Mr Jones added: “He really is remarkable. By the way, how many more medals would they have won if the UK were still a member?”

He told Express.co.uk: “If Guy Verhofstadt did not exist, Brexiteers would need to invent him.

“He is better than anyone at revealing the supranational anti-democratic arrogant power-sapping institution that is the EU.”

JUST IN: Howitzers to be sold to Taiwan in £540million deal

In doing so, Mr Verhofstadt simply drove support towards the UK and away from the EU, Mr Habib claimed.

He explained: “I will never forget his outrageous claims in Parliament that the British people did not know what they voted for. That Brexiteers are stupid. That the UK will be made to suffer. That the UK will be irrelevant outside the Empire (yes he calls the EU an empire).

“His latest idiotic claim is the EU would top an Olympics medal table. So it should, with 500 million people and many more competitors entered for each discipline than would be allowed for a country.

“And no, Mr Verhofstadt, the EU is not a country – not yet anyway. If it were, the Olympics would be the poorer for it, with a much smaller field of competitors.”

Mr Habib added: “There is no way he would allow rationality to interfere with his imperial superiority complex.

“He even wants the EU flag on the clothes of competitors from member states. So much for not politicising sport!

“One of my fellow MEPs, Martin Daubney, called him the Darth Vader of the EU. Made me laugh at the time except, of course, Darth Vader is an altogether more credible and charming individual.”

Meanwhile, Jayne Adye, director of Get Britain Out, suggested Mr Verhofstadt was kidding himself.

She told Express.co.uk: “The level of delusion displayed by Mr Verhofstadt somehow gets worse with every new Tweet he puts out.

“These Olympic athletes are representing their country not – the European Union – and no matter how much some inside the EU wish it to be so, the EU is not a country.”

Everyone in Europe could claim to be European, she pointed out, a fact overlooked by Mr Verhofstadt in his eagerness to suggest that the bloc and the continent were one and the same thing.

“Time and again those within the EU fail to learn from the past.

“Statements like this from Verhofstadt are why we can be certain the UK will not be the last country to leave the EU, because the bureaucrats and federalists will stop at nothing to achieve their dream, regardless of what normal people actually think.”

The UK currently has 16 Olympic golds, putting it 6th in the medal table, and above any member of the EU27. In total European Union countries have 68 golds.