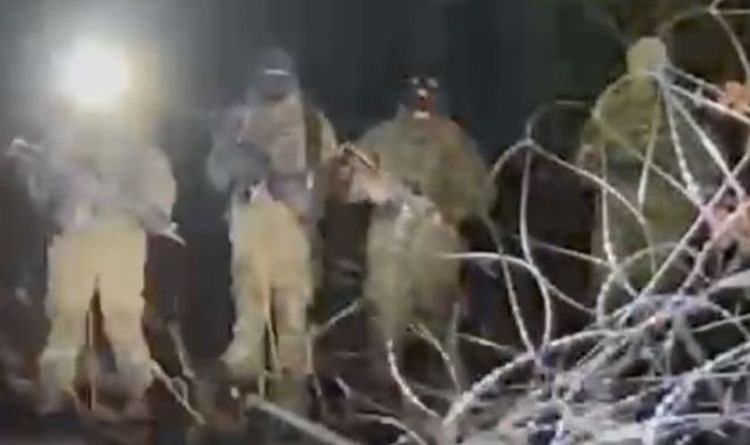 On Tuesday night, there were two successful breakthroughs of the Polish border. According to German news outlet Bild, the refugees were actively supported by Belarusian soldiers and government smugglers.

Poland immediately sent many of those who had breached the fence back to Belarus.

However, Amnesty International has claimed that Poland’s removal of refugees – many of whom are children under the age of 10 – has so far been illegal.

In a statement on Wednesday morning, Polish border guards said: “Yesterday, on November 23rd around 7.00pm, a group of over 100 aggressive foreigners forcibly pushed through the border between Poland and Belarus.

“Stones were thrown at the Polish services.

“The attack took place under the supervision of the Belarusian services.”

This comes as Belarus’s leader Alexander Lukashenko has been accused of luring refugees to the Polish border in what the EU has described as an attempt to “destabilize the EU”.

Video footage seen by Bild shows a large hole in the border fence about 60 kilometres north of the Belarusian metropolis of Brest in the south of the country.

The footage also shows heavily armed and masked Belarusian soldiers standing behind the four-metre-wide hole, blinding the Polish border guards with a flashlight.

In a statement, the charity said: “Under EU and international refugee law, Poland is obliged to ensure an individual assessment of all asylum claims and refrain from unlawful returns, including pushbacks and collective expulsions.

“Amnesty International calls on Poland’s government to ensure access to the territory to those seeking protection, end pushbacks, and urgently provide adequate shelter, food, water and medical care to the group of Afghans stranded at the Poland Belarus border.”

Last month, the Polish government sent 12,000 troops to reinforce the 10,000 already stationed at the border.

Ten people are so far estimated to have died at the border, including a fourteen-year-old boy who froze to death earlier this month.

French Secretary of State for European Affairs, Clement Beaune described the wave of refugees as a “migratory attack” designed to “destabilize the European Union.”

Meanwhile, Ursula von der Leyen tweeted: “This is a hybrid attack. Not a migration crisis.”