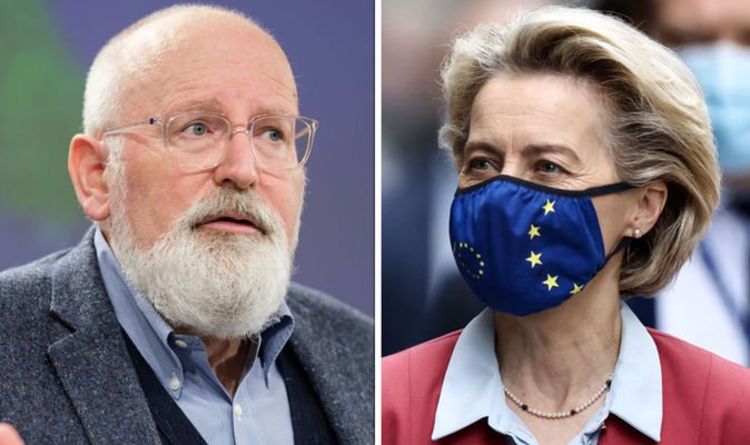 MEP Sven Giegold, a member of the Alliance 90/The Greens, part of the European Green Party, made his remarks as he and colleagues launched a petition calling for the reversal of what he terms the “greenwashing” of nuclear power and gas. While negotiations were ongoing in relation to the EU’s Fit for 55 climate change strategy, aimed at the target of reducing net greenhouse gas emissions by at least 55 percent by 2030, the bloc is proposing to classify new nuclear and gas power plants as “sustainable investments”.

Mr Giegold explained: “This would mean that gas and nuclear energy would be painted green and cash floodgates would be opened for these energy sources.

“It would send the EU’s climate and energy policy on a completely wrong path!”

The classification as a sustainable investment has huge consequences, stressed Mr Giegold, because in the future, banks, insurance companies and other financial market players, as well as small investors, will base investment decisions on what he called “the EU standard”.

He added: “Not only that: European and national subsidies and taxpayers’ money would also flow into nuclear power and gas if these energy sources were given the sustainability label.

“This is very important because Europe currently has to transition its energy supply to climate neutrality.”

He stressed: “The meltdown occurred at the last EU summit on October 22: EU Commission chief Ursula von der Leyen announced that she would in a short time present a proposal for the EU sustainability label, which also includes nuclear power and gas.

“The result: new nuclear power plants and even gas-fired power plants that are not state-of-the-art could hope for a windfall.”

Investments in nuclear power and gas would therefore get almost the same sustainability label as the construction of wind turbines and solar energy – resulting in what Mr Giegold termed “a meltdown for renewable energies!”

He said: “The European Commission surrendered at the last EU summit and gave in to the greenwashing of nuclear power.”

Apart from anything else, the decision did not make sense economically, Mr Giegold said.

He added: “Already today, electricity from renewables is increasingly cheaper than nuclear and gas.

“Those who rely on nuclear and gas now will reap higher electricity costs for private consumers and businesses.

“Together with the massive environmental and climate damage caused by the extraction of uranium and fossil gas (methane leaks!), it becomes clear: nuclear and gas are neither green nor economically sensible!”