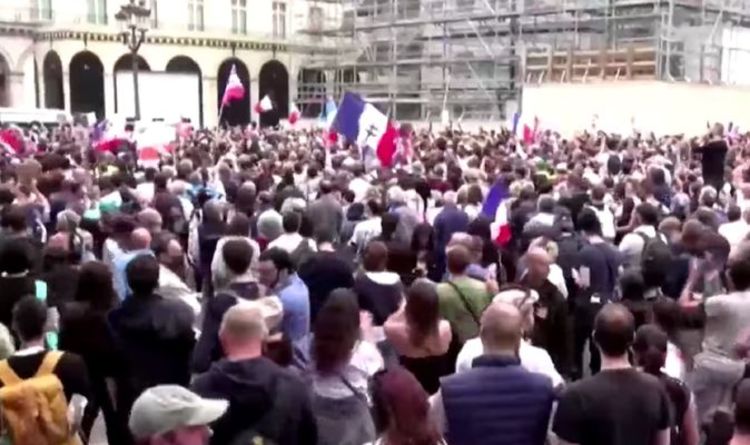 Police clamped down on protesters as Emmanuel Macron struggles to control mass fury as a result of his efforts to introduce the vaccine passports which would see French citizens forced to give proof of a negative Covid test or that they have been double jabbed before entering public venues. The rules would apply to restaurants, bars, shopping malls, and cinemas from August. Alongside the passports, President Macron wants to force health workers to get vaccinated but his demands have led to the public boiling over in rage as they argue he is stripping the country of its freedoms.

Pictures show hundreds of thousands marching in towns and cities up and down France as they come out in opposition to the plans.

Banners carried by protesters read “no to the health passport” and “don’t take our freedom”.

While others demanded an end to the earmarked forced vaccination of health workers.

The French interior ministry said 137 marches took place across the country, gathering nearly 114,000 people, of which 18,000 were in Paris.

One protester in Paris told WION news service that the move is an assault on “freedoms” in France.

They said: “Vaccinations are really about individual freedom.

“Everyone can choose – that’s not the theme here today.

“The theme is about the absence of freedom that is, unfortunately, continuing to grow in this country.”

READ MORE Do I need a Covid passport for the pub? New government guidelines issued

On Wednesday fierce fights between protesters and police broke out as security forced fired teargas to disperse protesters in Paris furious at Macron’s plans.

Despite the size of the protests, an Ipsos-Sopra Steria poll released on Friday found more than 60 percent of French citizens agree with mandatory vaccination for health workers as well as a requirement for a covid passport in some public places.

The backlash to the proposed passports and enforced vaccination of health workers comes as France battles soaring cases of the Beta (South African) variant.

The average number of new infections in France has reached nearly 11,000 per day.

As of Saturday, July 17 55.5 percent of French citizens have had a single dose of a vaccine while 44.8 percent have received both doses.