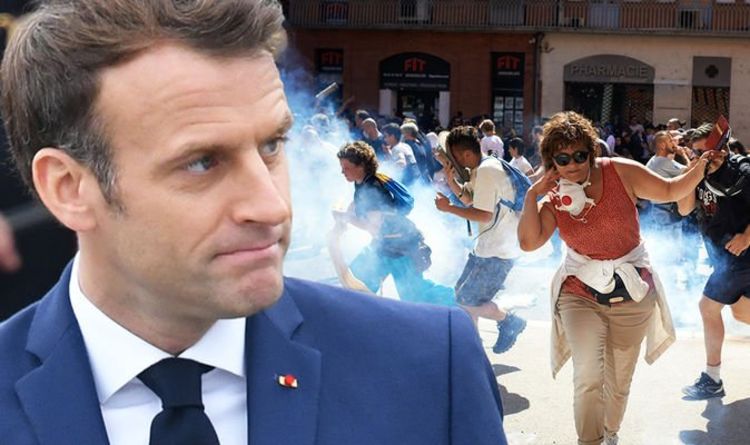 Hundreds of thousands of French protesters took to the streets yesterday to voice their anger at President Emmanuel Macron’s latest COVID-19 ‘health pass’ plans. Earlier this week, the French leader announced plans to roll out mandatory ‘health passes’ for all restaurants, bars, hospitals, shopping malls, trains, planes and other venues. The passes include data on Covid test results and vaccination status.

Protests against the plans took place across the country.

They called on Mr Macron to resign and threatened to boycott the health pass.

France is known as one of the most vaccine-sceptic countries in Western Europe.

Rallies turned violent in some cities like Nantes, where police deployed tear gas to disperse the demonstrators.

JUST IN: Havana syndrome: US diplomats struck by mystery illness

In Lyon, the police arrested nine demonstrators while in Lans-en-Vercors, a vaccination centre was ransacked on Saturday morning.

An estimated 114,000 people took part in the protests, according to the French Interior Ministry.

In response, Emmanuel Macron has climbed down on part of the health pass rules as he backtracked on its use in shopping centres.

On Sunday, Finance Minister Bruno Le Maire said that the passes will now only be required to enter malls with a surface area of more than 20,000 square metres.

In a speech to the nation this week, Mr Macron said he was attempting not to “make vaccination immediately obligatory for everyone but at pushing a maximum of you to go and get vaccinated”.

This comes amid the accelerating spread of the Delta variant inside the country.

Authorities fear more cases and deaths in the coming weeks amid concerns of a fourth wave in August.