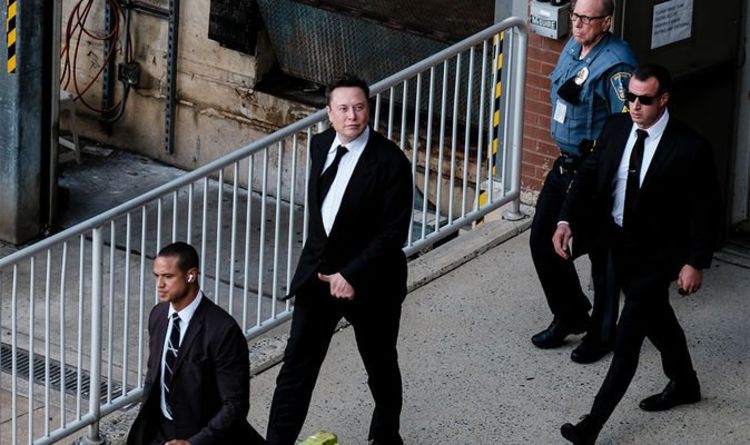 Jeff Bezos’s Blue Origin flight will only be sub-orbital. This means it will touch the edge of space, which is around 62 miles above sea level and known as the Karman line. The flight will not go into full orbit around the earth. Mr Musk took to Twitter on Saturday to respond to questions about his new Tesla FSD Beta when he was sent a meme regarding Mr Bezos and his Blue Origin adventure.

The meme used the Padme and Anakin format from Star Wars but instead it featured Mr Musk and Mr Bezos.

Mr Musk replied saying “haha” in what seemed to be a mocking stance.

Another user shared a photo of Jeff Bezos and Elon Musk from 2004 when the pair were reportedly discussing space travel.

To that tweet, Mr Musk replied by saying “[Bezos]can bench press a rhino” referring to Mr Bezos’s physical transformation over the years.

The friendly competition between the two billionaires has been going on for many years.

However, the pair have recently been beaten by the British entrepreneur Richard Branson in the so-called ‘race to space’.

Mr Branson travelled to the edge of space earlier this month on his Virgin Galactic spaceplane.

But before the Briton’s adventure, Mr Bezos’s Blue Origin mocked him for the spaceplane having “airplane-sized windows”.