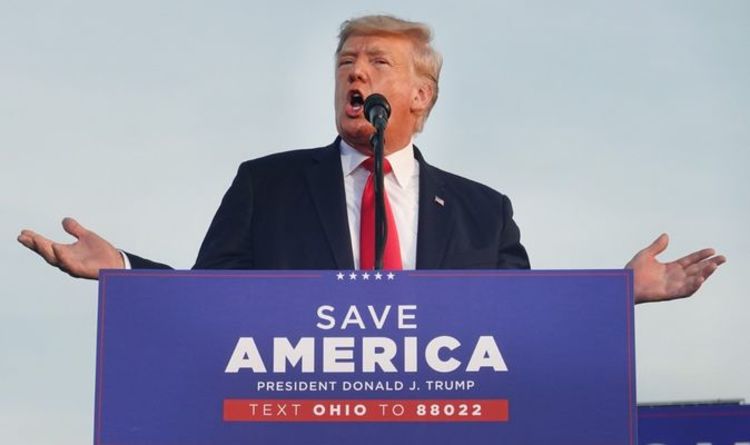 A poll released by the University of Virginia’s Centre for Politics asked 2,000 American voters more than 300 questions about social, political and psychological divides that have emerged between Donald Trump voters compared to Americans who backed Joe Biden. According to the poll, which was conducted with the help of the Project Home Fire, a majority of voters who supported the 45th President last November – 52 percent – would like to see the United States split along partisan lines.

In comparison, a significant minority of Biden backers – 41 percent – would agree to divide the nation between “red states” and “blue states”.

While this was not a majority of 2020 Biden supporters, only 18 percent of people who voted for Barack Obama’s Vice President said they were not in favour of the 25 “red states” seceding from the 243-year-old Union.

Researchers from the University of Virginia claimed they hoped to use the survey to help “reveal specific pathways that could persuade Americans on both sides of the divide to open their minds to mutually beneficial compromise.”

The University of Virginia’s politics director Larry J Sabato responded to the findings by saying: “The divide between Trump and Biden voters is deep, wide, and dangerous.

“The scope is unprecedented, and it will not be easily fixed.”

Larry Schack from Project Home Fire added: “In order to figure out ways to bridge these divides, we need to understand not just the divides themselves, but also understand the ways in which we can, together, move forward to reach common ground.

“This project helps us do both.”

Ex-Delaware Senator Joe Biden defeated the former businessman Donald Trump in the 2020 US Presidential Election by 306 electoral college votes to 232.

An overwhelming majority of both Democrats and Republicans told the polling company they now consider elected officials and compatriots who support or stand for the opposing party as a “danger”.

Voters were particularly divided on raising taxes on US households with incomes above $400,000, investing in universal pre-Kindergarten childcare and making community college free.

However, there was far more unity over improving the nation’s electrical grid, investing in the construction of “hard infrastructure” and raising levels of funding for rural broadband internet access.

In a press release, Virginia’s Centre for Politics listed four ways their project hopes to address the divide.

One of which claimed they want to help “provide a deeper understanding of the dangerous divide that threatens America’s pursuit of universally representative democracy”.

Robert McWilliams from Project House Fire added in the press release: “Our hope is that, by employing the tools of modern behavioural science, Project Home Fire can develop a deep, data-driven understanding of the fears and concerns animating the increasingly dangerous political and cultural divide in America.

“The first step toward effectively solving a problem is to accurately understand its causes and we believe Project Home Fire can provide such understanding.”