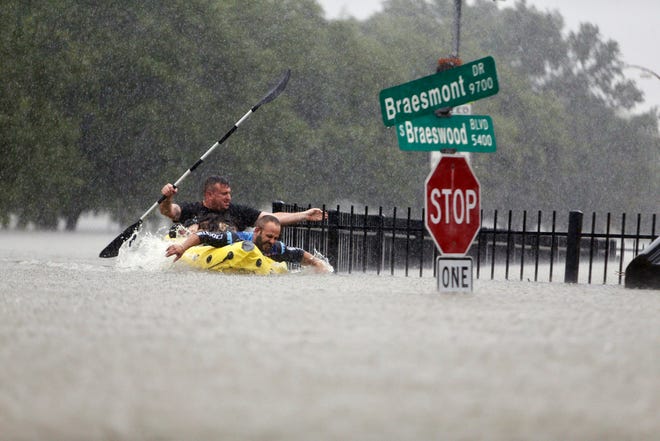 A grim global report on climate change released Monday paints a dire picture for the future of Earth.

Climate change has already led to irreversible shifts for the next hundreds to thousands of years, according to the report from the United Nations’ Intergovernmental Panel on Climate Change (IPCC). The effects of more extreme weather are already being felt across the globe, the report said, and reaching average global temperature increases that could have devastating effects may come sooner than expected.

Dubbed a “code red for humanity” by the U.N., the report says unequivocally humans have caused climate change, driven up greenhouse gas emissions and led to warmer weather.

Here are five of the most alarming findings in the climate report:

We may reach 1.5°C of warming much sooner than previously expected

“One of the most striking takeaways is that we may reach 1.5°C of warming a decade earlier than the IPCC had previously found,” said Helen Mountford of the World Resources Institute.

In five different scenarios of expected levels of greenhouse gas emissions laid out in the report, global warming of at least 1.5°C is the best estimate for the increase in temperature in the near term, from 2021 to 2040. Even under the lowest emissions scenarios, the report says 1.5°C warming in the next 20 years is “more likely than not” before likely bouncing back. Previous predictions did not expect this level of warming this soon.

The five scenarios varied more in how much global temperatures will increase in the coming century, but even under a very low greenhouse gas emissions scenario, the range of temperature increase by 2100 is very likely to be 1.0 to 1.8°C.

No region of the globe has been spared from the impacts of climate change, the report found. Across the world, climate change is “affecting many weather and climate extremes,” such as extreme heat, heavy precipitation and drought.

Since the IPCC’s last assessment, the evidence of humans’ influence on specific weather events has also been strengthened.

The report describes with virtual certainty that extreme heat has become more frequent and more intense across most parts of the world since 1950. It also reports with “high confidence” human-caused climate change is the main driver and without human influence, some of these extreme highs would be “extremely unlikely.”

Heavy precipitation has also increased in frequency and intensity across most regions of the world, the report said.

The report found the share of hurricanes that reach the devastating levels of Category 3 to 5 storms has also likely increased over the past 40 years. Humans have also increased the chances of extreme compound weather events, such as the frequency of concurrent droughts, fire weather across continents and compound flooding.

As global temperatures get warmer, extreme weather will get worse

Each incremental increase in global temperature also would lead to lower levels of Arctic sea ice, snow cover and permafrost.

Under all five emission scenarios the report lays out, the Arctic is likely to see at least one September month that is practically sea ice-free before 2050.

In a number of key areas, greenhouse gas emissions have already caused irreversible damage, and the effects are being felt on the time scale of centuries to millenniums, the report found.

The report says ocean temperature changes and ocean acidification, mountain and polar glacier melt and sea level rise are all expected to continue over the next hundreds of years regardless of human intervention.

Over the next 2000 years, even if global temperatures are kept to a 1.5°C increase, the average global sea level is expected to rise 2 to 3 meters.

The report also says ice loss in Greenland over the 21st century is virtually certain and there is high confidence that ice loss will increase cumulative emissions.

As the climate warms, Earth’s water cycle will increasingly tend to reach more extremes. In some areas that means wetter wet seasons and in others drier dry seasons, the report says.

Increased variability in rainfall tied to El Niño is also very likely under three of the global emission scenarios.

The way Earth naturally combats increased carbon emissions is also likely to be affected in the coming decades, the report says.