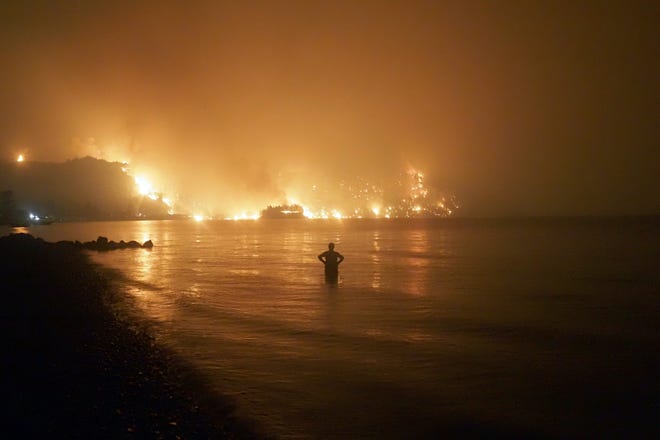 Hundreds of top scientists released a devastating report Monday on the danger that human-caused climate change poses to the world.

Calling it “code red for humanity,” the landmark report was released in Geneva, Switzerland, by the United Nations’ Intergovernmental Panel on Climate Change (IPCC).

“Climate change is already affecting every region on Earth, in multiple ways, (and) the changes we experience will increase with additional warming,” said Panmao Zhai of the IPCC.

The evidence is clear that carbon dioxide (CO2) is the main driver of climate change, even as other greenhouse gases and air pollutants play a role.

The 3,000-page report “provides an unprecedented degree of clarity about the future of our planet, and the need to reduce – and ultimately eliminate – our emissions of greenhouse gases,” said Zeke Hausfather of the Breakthrough Institute.

‘Worst is yet to come’: Disastrous future ahead for millions worldwide due to climate change, report warns

The authoritative report, which calls climate change clearly human-caused and “unequivocal,” makes more precise and warmer forecasts for the 21st century than it did last time it was issued in 2013.

“If this IPCC report doesn’t shock you into action, it should,” said Helen Mountford of the World Resources Institute. “The report paints a very sobering picture of the unforgiving, unimaginable world we have in store if our addiction to burning fossil fuels and destroying forests continues. One of the most striking takeaways is that we may reach 1.5°C of warming a decade earlier than the IPCC had previously found.”

Almost 200 countries have signed up to the Paris climate accord, which aims to keep global warming below 2 degrees Celsius (3.6 degrees Fahrenheit), ideally no more than 1.5 degrees C (2.7 F), by the end of the century compared to pre-industrial times.

The report projects that in the coming decades climate changes will increase in all regions. For 1.5°C of global warming, there will be increasing heat waves, longer warm seasons and shorter cold seasons. At 2°C of global warming, heat extremes would more often reach critical tolerance thresholds for agriculture and health, the report shows.

“Scientists have predicted the likelihood of accelerating climate change for more than a century now – yet too often their warnings have been disregarded,” said Katharine Hayhoe, chief scientist for the Nature Conservancy. “My hope is that the rigor, transparency and unprecedented urgency of this latest IPCC report will make it simply impossible to ignore.”

While many of the report’s predictions paint a grim picture of humans’ impact on the planet and the consequences that will have going forward, the IPCC also found that so-called tipping points, such as catastrophic ice sheet collapses are “low likelihood,” though they cannot be ruled out.

The report comes three months before a major climate conference in Glasgow, Scotland.