Standing on the same ground that was attacked on 1/6, Sen. Chuck Grassley (R-IA) claimed on the Senate floor that Trump has a right to plot a coup.

“The president has every right to discuss ideas & strategies with his closest advisors … for robust discussion” — Grassley is talking here about Trump’s attempts to scheme with the DOJ to overthrow a free and fair election https://t.co/JjItHbsW99 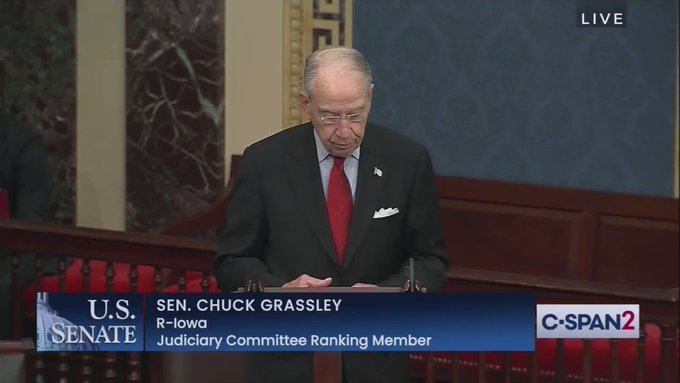 Grassley said, “The President has every right to discuss ideas and strategies with his closest advisers, whether that president is Democrat(ic) or Republican should feel unrestrained to bring ideas to his closest staff for robust discussion. Eventually, the facts will come out, and Trump will have to address them, good or bad depending on the facts at hand. However, the essential question that should be asked is, what was the final decision? And that is my major concern about the recent public comments coming out of these interviews I’ve discussed.”

Chuck Grassley Seems To Be Saying That It Is Fine To Plot A Coup As Long As A President Doesn’t Do It.

Sen. Grassley seemed to be suggesting that plotting a coup is just “locker room talk.” Unless the government is actually overthrown, then it is no harm, no foul.

The problem is that the 1/6 attack was more than talk. Trump funded the rally, his White House communicated and coordinated with the attackers, and he incited the attack.

Trump’s talk of trying to force the DOJ to overturn the election is part of a broader plot. His pressure on the DOJ and the 1/6 attack are part of the same thread, and no Sen. Grassley, presidents do not get to plot coups after they lose elections.