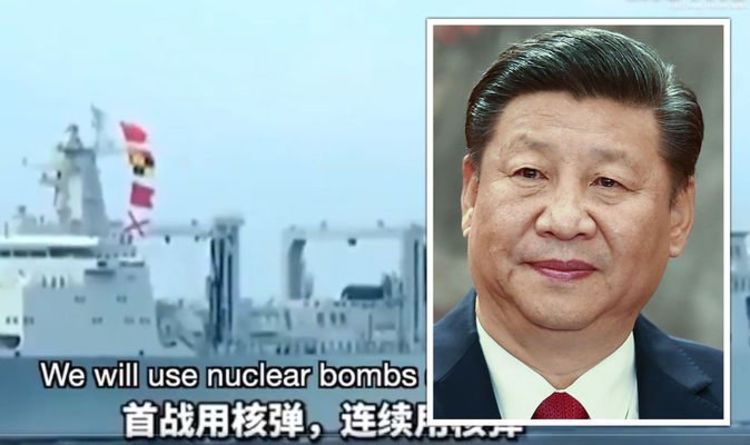 China has vowed to launch a nuclear war with Japan if Tokyo intervenes to protect Taiwan. Beijing made the threat as Japan prepares to host the 2021 Olympic Games, the East Asian superpowers have been in conflict over the status of Taiwan. The island nation has faced the brunt of Chinese military aggression in recent months with the Chinese Communist Party seeking to incorporate the breakaway state into mainland China.

The spin-chilling video released by a CCP controlled TV channel referenced the nuclear bombings of Hiroshima and Nagasaki at the end of WW2.

“When we liberate Taiwan, if Japan dares to intervene by force, even if it only deploys one soldier, one plane and one ship, we will not only return reciprocal fire but also start a full-scale war against Japan,” threatened the PLA military spokesperson.

“We will use nuclear bombs first.

“We will use nuclear bombs continuously until Japan declares unconditional surrender for the second time.

“What we want to target is Japan’s ability to endure a war. As long as Japan realizes that it cannot afford to pay the price of war it will not dare to rashly send troops to the Taiwan strait.”

China has followed a ‘No first use’ (NFU) policy on nuclear weapons since 1964 but the video went on to claim that Japan could be made an exception.

It states: “Our country is in the midst of a major change that has not been seen in a century and all political policies, tactics, and strategies must be adjusted and changed in order to protect the peaceful rise of our country.

“If Japan goes to war with China for a third time, the Chinese people will take revenge on the old and new scores.”

“To change from this liberal democratic rule by law to something that is more amenable to its system.

“They are not you know covert about this or secretive in any way, they say this is their plans and intentions.

“It is a different perspective and they say that Western democracy has failed, this is why we would replace it.”

“From our perspective looking at them, it is a more authoritarian structure,” he added.