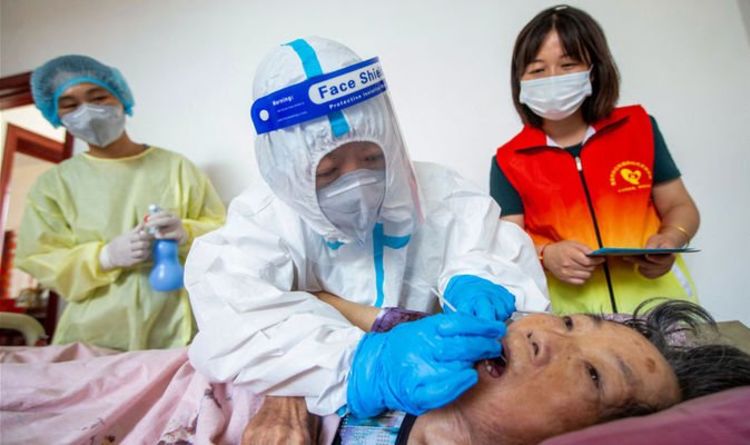 The highly infectious strain has been now confirmed in more than 12 cities since July 20, with more than 900 symptomatic cases of Covid in less than a month. Officials have asked local government authorities to rigorously track infections and close loopholes in control efforts, with a statement issued by the National Health Commission (NHC) saying: “A laxity of mind should be firmly overcome.”

Most of Sunday’s local patients were in the central city of Zhengzhou and the eastern city of Yangzhou, government figures showed.

In the latter, warnings have been issued to five officials for mishandling mass testing.

a medical worker taking a swab sample for Covid-19 from an elderly resident in Nantong (Image: GETTY)

A worker handles swab samples for the Covid-19 test in the biosafety cabin in Yantai, East China (Image: GETTY)

Yangzhou is now outstripping neighbouring Nanjing, where the delta-driven outbreak began, as China’s biggest hotspot in China, reporting a total of 308 confirmed cases as of today.

This figure includes six critically ill patients, the deaths of any would represent China’s first from Covid in more than six months.

So far, more than 30 officials nationwide have been disciplined, the state-run Global Times newspaper has reported.

Residents sit on stools as they line up for nucleic acid testing of COVID-19 on August 6, 2021 in Wuhan, Hubei Province, China (Image: GETTY)

Analysts regard the Delta variant as the sternest test of China’s zero-Covid strategy since the initial outbreak at the start of last year.

However, they expect authorities will quash it before it gets out of control, despite some economic costs.

Yangzhou has started a fifth round of mass tests, city authorities said on Monday, when Zhengzhou is expected to wrap up sample collection for its third round of citywide tests.

Citizens line up to get vaccinated against COVID-19 at a vaccination site set up in a shopping mall (Image: GETTY)

Nanjing, which was hit hard in the outbreak which began late in July, though it has reported no more than five daily local cases since August 2, has also initiated another round of targeted testing in some areas, after three rounds citywide.

The number of new asymptomatic infections was 39, up from 30 a day earlier. China does not classify them as confirmed cases.

The city of Wuhan, where COVID-19 was first detected, has also witnessed infections take root again after the virus was brought under control there last year.

Beijing holds local officials accountable for the virus’s re-emergence in China, blaming them for failing to enforce precautions and restrictions, hence transforming flare-ups to turn into major outbreaks.

Wang Peiyu, a deputy head of Peking University’s School of Public Health, told the Global Times yesterday the outbreak has exposed the loopholes in the epidemic control work in some places, including airports, and exposed the mistakes of some individuals.

He explained: “The outbreak is a wake-up call to all of us.

“The virus may slide in any time when we loosen controls.

“We must always tighten the string of epidemic prevention.”

Meanwhile, China’s former health minister Gao Qiang rejected the concept of “learning to live with the virus” increasingly favoured in the West, including the UK.

In an article published on Saturday, Gao claimed it was such a strategy which had led to fresh outbreaks in many countries.

China’s tally of infections stands at 93,826 since the outbreak began, while deaths stayed at 4,636.