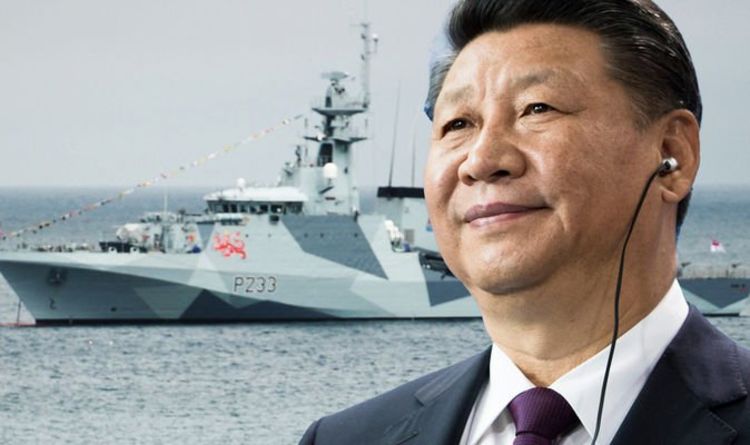 Details of the move were announced by Defence Secretary Ben Wallace during a visit to Tokyo, where he met Japanese counterpart Nobuo Kishi. The latest announcement comes with China threatening to launch nuclear missiles at Japan as tensions over Taiwan threaten a full scale war. The plans also come as the UK looks to deepen security ties with Japan, which has expressed increasing fears over China’s territorial ambitions in the region, including Taiwan.

The two ships to be permanently stationed in the Far East will be HMS Spey and HMS Tamar, which are both 90-metre offshore patrol vessels.

Speaking alongside Mr Kishi, Mr Wallace said: “Following on from the strike group’s inaugural deployment, the United Kingdom will permanently assign two ships in the region from later this year.”

The British carrier, which will have F-35B stealth jets on board its maiden voyage, will be escorted by two destroyers, two frigates and two support vessels, as well as ships from both the US and the Netherlands.

It will travel through the hotly-disputed South China Sea, claimed by China and Southeast Asian countries, with stops in India, Singapore and South Korea.

Mr Kishi said following its arrival, the Queen Elizabeth and its escort ships will split up for separate port calls to US and Japanese naval bases.

The British carrier, which will have F-35B stealth jets on board its maiden voyage, will dock in Yokosuka, which is also the home of the country’s fleet command and the USS Ronald Reagan – the only forward deployed US aircraft carrier currently in operation.

China news: Ben Wallace made the announcement during a visit to Japan (Image: GETTY)

In a statement on the deployment, a spokesperson for the Pentagon praised Britain for its “commitment to an inter-connected network of allies and partners, who mutually cooperate and support freedom of navigation and a rules-based order in the Indo-Pacific region.”

Japan is an extremely close ally of Washington and hosts the biggest concentration of US military forces outside the United States, which includes ships, aircraft and thousands of Marines.

China news: HMS Tamar is one of two ships being deployed by Britain (Image: GETTY)

Island nation Taiwan has faced the brunt of Chinese military aggression in recent months with the Chinese Communist Party (CCP) looking to incorporate the breakaway state into mainland China.

A chilling video released by a CCP controlled TV channel referenced the nuclear bombings of Hiroshima and Nagasaki at the end of World War 2.

A PLA spokesperson warned: “When we liberate Taiwan, if Japan dares to intervene by force, even if it only deploys one soldier, one plane and one ship, we will not only return reciprocal fire but also start a full-scale war against Japan.

“We will use nuclear bombs first.

“We will use nuclear bombs continuously until Japan declares unconditional surrender for the second time.

“What we want to target is Japan’s ability to endure a war. As long as Japan realises that it cannot afford to pay the price of war it will not dare to rashly send troops to the Taiwan strait.”

China has continued to follow a ‘No first use’ (NFU) policy on nuclear weapons for nearly 60 years but the video warned Japan could be made an exception.

It states: “Our country is in the midst of a major change that has not been seen in a century and all political policies, tactics, and strategies must be adjusted and changed in order to protect the peaceful rise of our country.

“If Japan goes to war with China for a third time, the Chinese people will take revenge on the old and new scores.”