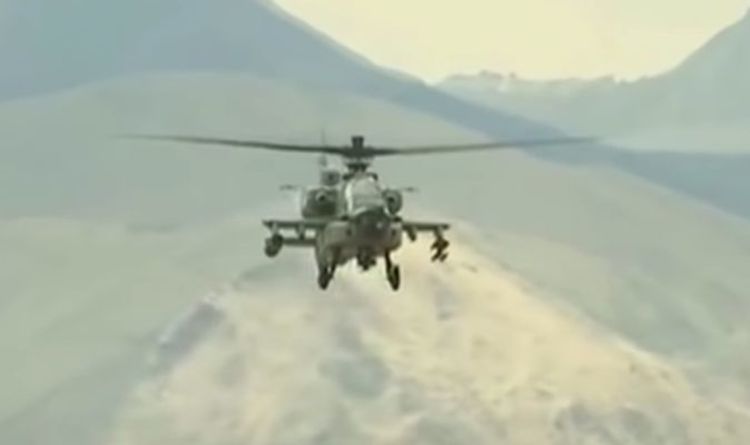 An increase in military activity by the Indian armed forces in Eastern Ladakh, India comes despite China and India’s forces disengaging in the area over August 4-5 after brutal fighting saw 20 soldiers killed last year. Apache, Chinook and Mi-17 fighter helicopters can be seen continuously patrolling the area while tanks, armoured vehicles and soldiers can be seen performing “special operations” around the Nyoma Advanced Landing Ground (ALG). The Nyoma ALG, an isolated location airbase at an altitude of 13,500 feet, is located a mere 25km from China so is strategically vital due to its proximity to the Line of Actual Control which separates the two super-powers.

Explaining the new footage, WION news agency reporter Priyanka Sharma said the move signals a new strategy from the Indian armed forces to beef up its presence in the region to keep China back.

She added how the activity is also a “show of strength” by India to China as Indian forces conduct “special operations” to prove they can operate “effectively” in a contested zone.

It also “bridges the gap” between airbases located far from the border with China.

Sharma said how the new presence of aircraft and vehicles also “enables quick movement of men and materials in eastern Ladakh.”

In the footage, the Indian army can be seen flying low altitude drills in Apache’s and other helicopters.

While tanks can be seen hurtling along valleys conducting what appears to be attack drills.

Indian soldiers can also be seen exiting aircraft and “showcasing” a staged attack as they flex their military capabilities in front of China.

The reporter went on to explain how the regiment’s operating in the region have adapted military vehicles such as tanks and armoured vehicles so they can operate “more effectively” at higher altitudes.

She even stressed how the army has also been working to create a “huge infrastructure” to support the new tank operations.

These infrastructure projects include the construction of tank shelters in the area as part of a “massive” operation to beef up the Indian army’s presence.

She added the move is also “to counter the Chinese aggression in eastern Ladakh” despite a fall in tensions following the 12th Corps Commander talks on July 31 which saw tensions ease off between the two embittered countries.

It comes as June last year saw a spike in fighting which led to 20 Indian soldiers being killed by Chinese soldiers in a “hand to hand combat” incident in the region.

The incident is understood to have been sparked following numerous accusations by both sides of trespassing on the border.

The accusations saw a massive ramping up of tens of thousands of troops along with artillery, tanks, and fighter jets along the border.

India and China share a 3,500-km (2,175-mile) border that stretches from the Ladakh region in the north to Sikkim in India’s northeast.