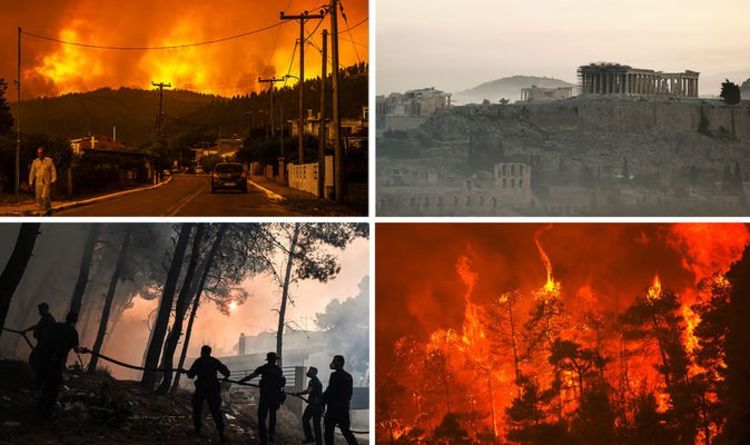 Two people have already been killed, including a 38-year-old volunteer firefighter, and president of the Athens Chamber of Commerce, Konstantinos Michalos. A further 20 people have been injured. Prime Minister Kyriakos Mitsotakis said the fires showed “the reality of climate change“, and huge clouds of smoke and ash near the capital has meant many are urged to leave the area and seek safety elsewhere.

About 20 water-bombing aircrafts and hundreds of firefighters are being used to tend to the wildfires, whilst extra firefighters and planes are being sent in from countries including the France and the US to help get the situation under control.

The UK Government has also advised that Home Secretary Priti Patel is sending “experienced firefighters” to help the cause after witnessing the “devastating effect” of the fires.

More than 150 fires have been reported, whilst six areas of the country have been put on high alert as the area copes with the extreme weather that has been affecting much of Europe this summer.

The blazes are proving difficult to control due to the strong winds and high temperatures. These unpredictable winds mean that the worst blazes are around the north of the Athens region.

Government minister Nikos Hardalias commented on the dangerous conditions facing the firefighters who are tackling the blaze.

He said: “Wildfires of unprecedented intensity and spread, all our forces are fighting the battle day and night to save lives, together with volunteers”.

As the fires wreak havoc on homes and businesses in towns and villages, many locals are also forced to evacuate the animals they rely on for their livelihood too.

Neighbouring Turkey has also been affected with the country’s worst-ever wildfires, which have already killed eight people and resulted in tens of thousands being evacuated along the southern coast.

Climate change is said to be the cause, and has increased the risk of the hot, dry weather that can cause the wildfires to worsen.

A coastguard official on the island, Sotiris Danikas, told broadcaster ERT “We’re talking about the apocalypse, I don’t know how to describe it”.