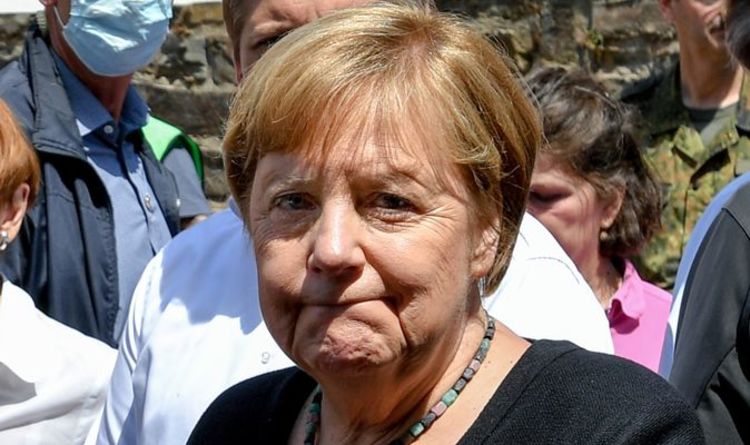 Data released today by the Robert Koch Institute (RKI) has revealed the seven-daily rolling average for infections has reached 10.9 per 100,000 people. The worrying figure is more than double the 4.9 cases per 100,000 people reported on July 6.

The number of daily COVID-19 infections has also doubled in the past 24 hours as fears grow of another wave.

Today, the RKI reported 1,183 new infections, a huge increase from the 546 cases that were confirmed on Monday.

The number of daily coronavirus-related deaths has also soared to 34 on Tuesday – compared to one fatality on Monday.

Last week, Ms Merkel warned more people would need to get vaccinated in order for restrictions to be removed.

It comes as Boris Johnson removed all restrictions on social distancing in England on Monday.

Ms Merkel said: “The central question is how many people will seek a vaccination.

“The more people are vaccinated, the freer we will all be again.”

Less than 50 percent of adults in Germany have had both doses of a coronavirus vaccine.

The German chancellor also ruled out the prospect of compulsory jabs as seen for healthcare workers in France.

It comes as France has drawn up plans to tackle a fourth wave of infections.

French government spokesman Gabriel Attal said: “We have entered the fourth wave of the epidemic.”

She said: “The sum of all events that we are witnessing in Germany and the forces with which they occur all suggest… that it has something to do with climate change.

“We have to hurry, we have to get faster in the fight against climate change.”

A draft bill is set to be published on Wednesday to provide further economic support.