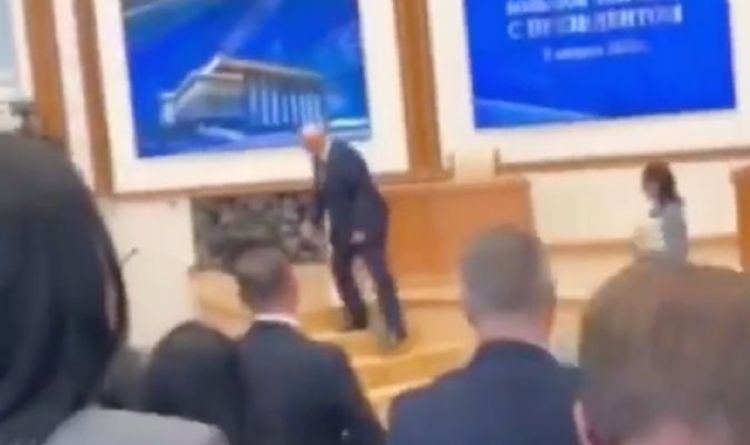 In a video circulating on social media, Mr Lukashenko could be seen looking worse for wear as he rose from his seat to leave the stage. The video, which was filmed by a member of the cheering audience, could shed light on the Belarusian leader’s health as official cameras recording the speech cut away as he ended his marathon annual address and headed across the stage struggling. It is unknown why the Belarusian dictator appeared unwell.

The footage was shared by opposition Belarusian journalist Tadeusz Giczan on Twitter.

He shared the video, commenting: “Look at Lukashenko’s condition while he was leaving his yesterday’s press-conference.”

Some took to Twitter to speculate on the video.

One person who saw the footage tweeted how he looked “Yeltsin-y” in reference to the boozy former Soviet Union President.

JUST IN ‘You can choke on your sanctions!’ Belarus president rages at UK over economic punishments

While another tweeted: “Just a guess but looks a lot like a pinched leg nerve in the lower spine — from age-related degeneration.”

A third wrote: “When your leg falls asleep after eight hours of sitting!”

The video has emerged following Mr Lukashenko’s furious annual address to his nation where he lashed out at the UK over new economic sanctions imposed on Belarus following a string of international incidents.

While Belarusian sprinter Krystsina Tsimanouskaya refused to board a flight home after claiming to have been taken to the airport against her wishes by Belarusian officials. She has since sought asylum in Poland.

It comes as Britain imposed sanctions on Belarus’s potash and petroleum product exports on Monday in an attempt to put pressure on President Lukashenko.

Foreign Secretary Dominic Raab said: “These sanctions demonstrate that the UK will not accept Lukashenko’s actions since the fraudulent election.

“The Lukashenko regime continues to crush democracy and violate human rights in Belarus.

“The products of Lukashenko’s state-owned industries will not be sold in the UK, and our aerospace companies will not touch his fleet of luxury aircraft.”